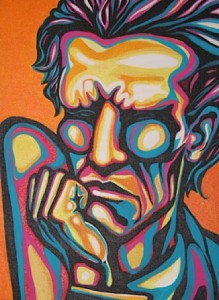 This presentation begins by justifying, in terms of theory, methodology and historical context (Lima in the 1920s), a reading of César Vallejo’s collection Trilce (1922) as theatrical or performance text. We identify its script or rather, its fragmentary pattern for improvisation: the myth of Inkarrí. The script contains instructions for the representation of dimensions and space on stage, as well as performance directions for the various characters that appear in Trilce; among these are several heteronyms of the poetic subject. We then consider one of the specific audiences with which Trilce enters into dialogue: the journal Colónida (1916) and the Colónida movement that grew up around it, as well as the broader, less specific, but always contemporary audience that is ourselves, now. Keywords for the paper are Trilce, Colónida, and poetry as theatre.