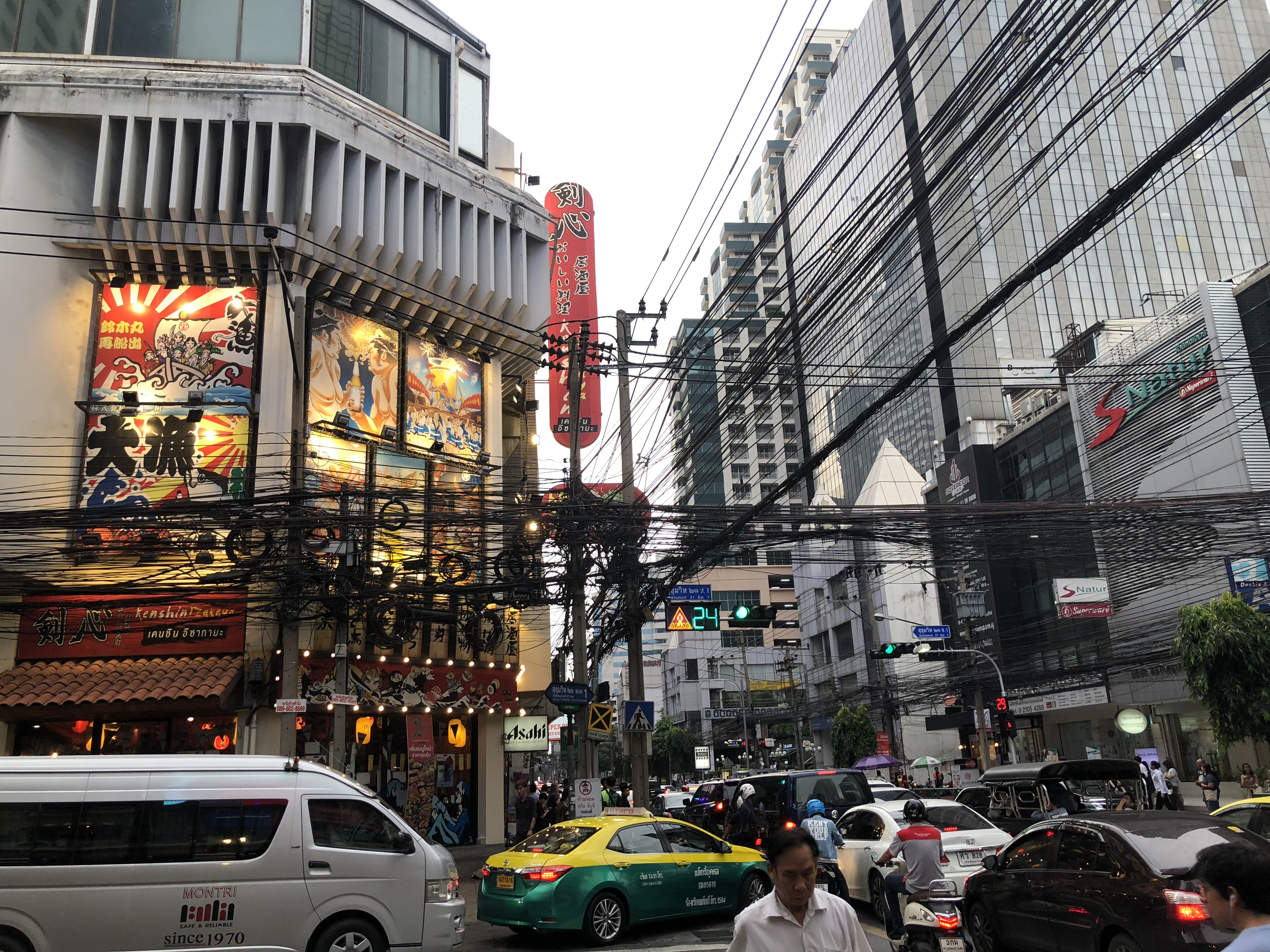 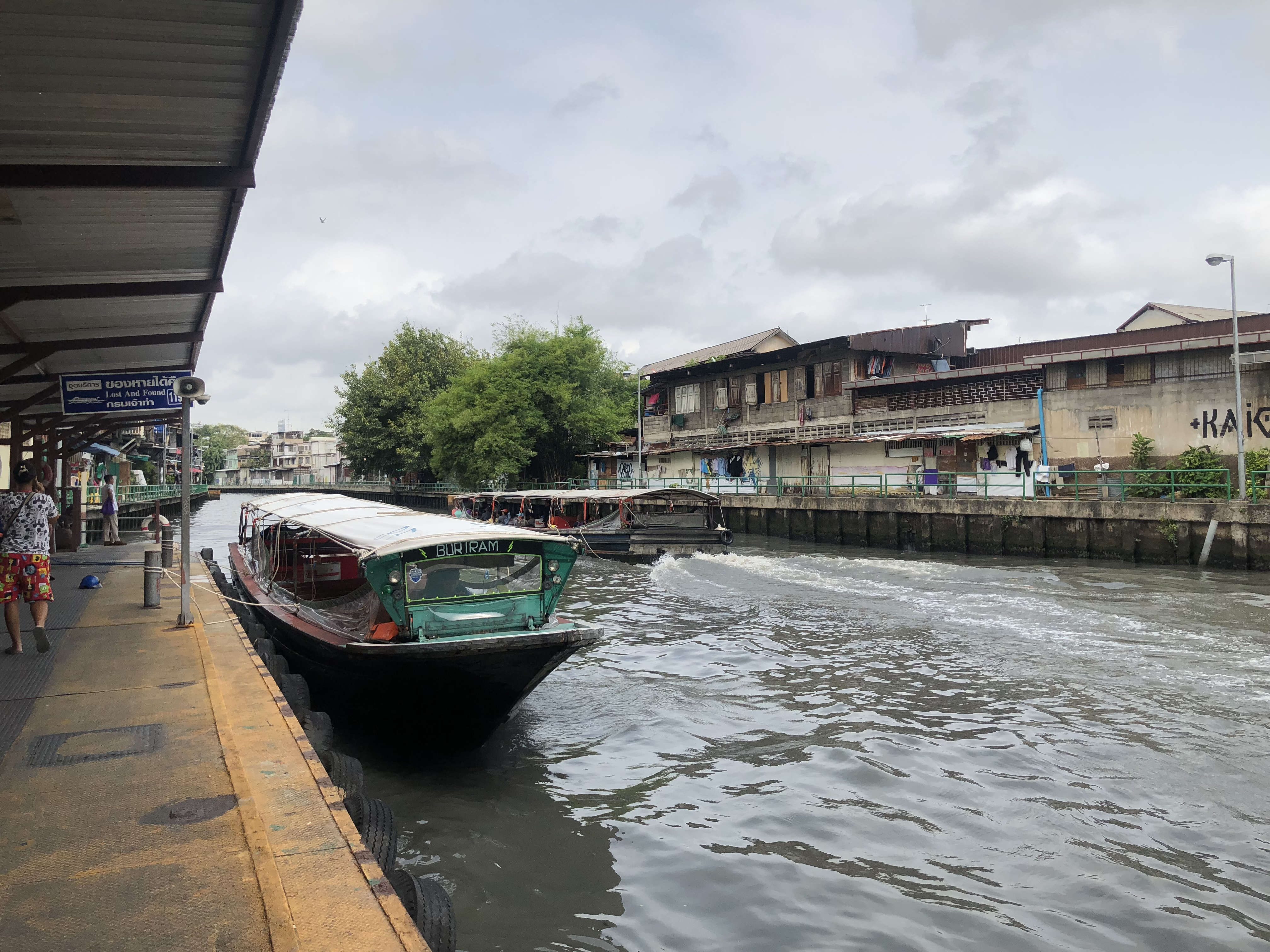 From the very first hours in Bangkok, it could be felt a special level of intensity in the city. Among other elements, you could witness an additional speed of the people walking in the street, an additional layer of diversity in the restaurants and shops, and a juxtaposition of the contemporary growth of the city with some very local elements of the built environment. When exploring the city, one could find a very popular Japanese restaurant with an amazing variety of beers and dishes from that country, all behind an infinite density of cables hanging over the street. At the same time, it would immediately call the attention the fairly well-developed infrastructure overlaying the continuous presence of the golden architecture and symbols of the country in almost every big building, public space or crossroad. Naturally, another omnipresent element in that mosaic was the water, which is what we came to study in the city. The group of interviews that we had in this city introduced us to the idea of a metropolis whose familiarity with the water could be dated up until the agrarian origins of the canals that today go through the urban area. Nowadays, all those canals are part of a complex infrastructure that is devoted to carry the increments of water in the rainy season and eventually take it to the sea. In addition, something that entirely contrasts with the two cities that we visited previously is that the canals also play a role as a means of transportation for Bangkok with a very smart system of water-taxis that cross the city or take the people from one edge of the Chao Praya River to the other. One cannot help to envision this level of coexistence with the water as a possible future for Manila, Jakarta and other cities where the water is perceived as a latent threat.
As in the two previous case studies, the interviews and research that we carried out took us to one specific site, Phoemsin Village. It was an informal settlement in both sides of the Song canal near the Don Mueang airport. Among the objectives of the government is the widening and deepening of the canals of the city, in order for them to perform better the task of serving as a container and pathway for the increase of the level of the water. One of the things that hinders that task is the presence of communities that live in the informal settlements in the banks of the canal. Something quite interesting is that, despite the people in the area do not have legal title to the land, there appears to be clear consciousness of the impracticability of making a complete removal of the residents of the settlement. Be it for the conviction on the unfairness of a forced displacement of the communities or for the fear of the political costs of such a program, the projects developed by the government have procured to keep the residents of the informal settlement in their original place. With that objective, the government has developed several stages of housing opportunities. Despite the relative success that the program appears to have had, this case shows some clear differences with the previous two cities, since the intervention of the state has come with a very little explicit participation of the people. On the one hand, when asking professionals that had worked for the government about the input of the residents in the design of the developments, the main reference that we received was that of the different colors that the stages of the developments have. On the other hand, when asking the own residents of the neighborhood about practices or strategies that they adopt in anticipation to episodes of flooding, we were also told that there were not particular physical elements or organizations that they rely on, and that they trusted the work that the government has been doing in order to deepen the channels for avoiding the flooding of the area. All in all, the community that we visited seemed to have a very thriving environment and with a lot of room for activities in the public space, a landscape that contrasts very starkly with the very precarious shacks that are still located in the other edge of the river.