Bell Middle School teacher Shane Parmely was detained for over an hour by Border Patrol agents at a checkpoint in New Mexico because she refused to say whether she was a U.S. citizen.

Parmely’s family helped her film the incident, which she posted Friday evening on her Facebook account in several segments that were widely shared. Parmely told Border Patrol agents that she believed she did not have to answer their questions. One agent showed her a card listing immigration law and a Supreme Court case decision that give Border Patrol agents authority to operate checkpoints within 100 miles of the border and to ask questions about citizenship without warrants.

“Citizens?” an agent asked her as she drove up to the checkpoint.

“Are we crossing a border?” Parmely responded.

“No. Are you United States citizens?” he repeated.

“Are we crossing a border?” Parmely repeated. “I’ve never been asked if I’m a citizen before when I’m traveling down the road.”

As the agent continued to repeat his question, Parmely told him that he could ask her the question, but she didn’t have to answer.

When Parmely refused to answer the question, the agent told her that she was being detained for an immigration inspection.

“So if I just come through and say, ‘Yes, I’m a citizen,’ I can just go ahead?” Parmely asked.

“If the agent is justified by the answer, then yes,” the agent responded.

“So if I have an accent, and I’m brown, can I just say, ‘Yes,’ and go ahead or do I have to prove it?” she asked. “I have a bunch of teacher friends who are sick of their kids being discriminated against.”

“Ok, I’m not discriminating against anybody,” the agent said.

Later during the encounter, Parmely’s son asked to use the bathroom. One agent told Parmely that he could not use the bathroom until his mother answered the question about her citizenship. Another agent came over shortly after to escort the boy to a bathroom.

Parmely’s videos are not an isolated incident. For years, people who view such checkpoints as a violation of their Constitutional rights have filmed and posted interactions with Border Patrol agents.

While most praised Parmely for her actions, some criticized what they saw as disrespect to law enforcement doing their jobs.

“I’m SICK of people claiming that law enforcement is the problem. Until of course you need them,” wrote Jaime N Jerry Bevan, who said that her husband is a detective.

Parmely responded, “What was the point of refusing to move to the back of the bus?”

Parmely responded to a Facebook message from a Union-Tribune reporter, saying she might be able to talk later but could not for now.

The school website indicates that she teaches English, art and theater.

According to a flier from the American Civil Liberties Union, Border Patrol has the authority to stop vehicles at checkpoints and ask questions to verify citizenship.

The flier says that people can exercise their right to remain silent but may be detained if they refuse to answer citizenship questions. Agents cannot detain someone for an extended time without cause.

Border Patrol spokesman Mark Endicott issued a statement in response to the incident saying the agency’s policy is to treat people with dignity and respect.

“Border Patrol checkpoints are a critical tool for the enforcement of our nation’s immigration laws,” the statement said. “At a Border Patrol checkpoint, an agent may question a vehicle’s occupants about their citizenship, place of birth, and request document proof of immigration status, how legal status was obtained and make quick observations of what is in plain view in the interior of the vehicle.

“During the course of the immigration inspection, if an occupant refuses to answer an agent’s questions, the agent may detain the driver for a reasonable amount of time until he or she can make a determination regarding the occupant’s immigration status.”

Senator John McCain returned to the Senate Chamber on Tuesday to cast a deciding vote allowing the legislative body to begin debating a bill put together behind closed doors by Republicans that would repeal and replace the Affordable Care Act.

And while many doctors and provider associations are opposed to a repeal — alongside at least half of Americans — major health industry players, especially on the insurance side, have been vocal in their opposition to the Affordable Care Act. In fact, the health industry donated millions more to Republicans than Democrats in every election cycle since 2010, as the Republican alternatives are expected to substantially enrich the industry.

Health industry professionals have overwhelmingly supported Republicans seeking federal office, and one could imagine McCain and others who benefit from that support might push policy that would be more financially beneficial to their benefactors.

Healthcare providers are among the top 5 contributors by industry to McCain’s campaign coffers, having given $7,184,854 since 1989, according to OpenSecrets.org.

When the insurance industry is factored in, total contributions from the health-related sectors amount to $25,272,446.

A full list of donors in the health and insurance industries provided by FollowTheMoney.org reveals that USAA, Humana, Liberty Mutual, American Association of Orthopaedic Surgeons, Cigna Corp, American Society of Anesthesiologists, American Society of Plastic Surgeons, National Association of Insurance & Financial Advisors and others have been top donors to McCain throughout his career, providing as much as $20,000 (USAA’s contribution) each to his campaigns.

Selecting just for health industry contributions, here are some of the top donors to McCain ranked by contribution amount, from the Institute for Money in State Politics:

Here’s the top of the donor list when sorted by Finance, Insurance and Real Estate (FIRE):

Military Times reported in 2015 that the military spent $84 million on erectile disfunction medications such as Viagra and Cialis the year before. Meanwhile, a 2016 Rand Corporation study estimated that the maximum annual medical costs for transgender military members would be around $8.4 million, Business Insider reports.

“You’re talking about .000001% of the military budget,” being spent on transgender services, Navy SEAL veteran Kristin Beck, who is transgender, told Business Insider.

President Trump announced Wednesday on Twitter his decision to ban transgender people from serving in the military “in any capacity.” He cited the “tremendous” costs for providing medical services for transgender troops.

“Our military must be focused on decisive and overwhelming victory and cannot be burdened with the tremendous medical costs and disruption that transgender in the military would entail. Thank you,” Trump tweeted.

His announcement sparked widespread condemnation from members of both parties, including Republicans who broke with the president to speak out against the ban. 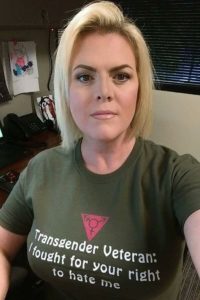 Trump to ban transgender people from all military service

Retired transgender Navy SEAL: Tell me to my face I’m not worthy of serving

What’s Next In The Health Care Debate? 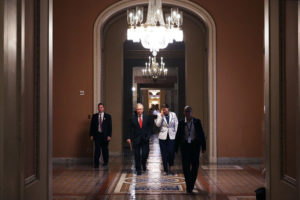 Senate Majority Leader Mitch McConnell and Republican lawmakers are hashing out potential health care plans, though a repeal-only and a repeal-and-replace option have failed in the last two days. Chip Somodevilla/Getty Images

Senate Republicans have at least narrowed the options on what comes next for the Affordable Care Act — casting two separate votes since Tuesday that knocked out a “repeal-only” proposal and rejected a plan for replacement.

So, as lawmakers resume debate on Thursday, they will be staring at basically one possibility: a so-called “skinny repeal” that would surgically remove some key provisions from Obamacare, while leaving the rest intact — at least for now.

The skinny repeal would take out requirements for individuals and employers to get health insurance — a feature that is central to the Affordable Care Act’s goal of expanding risk pools and lowering costs. The GOP plan would get rid of the medical device tax, intended as a revenue source to fund the current health law. The proposal would also eliminate a public health fund provision.

Senators have already rejected the Better Care Reconciliation Act replacement plan and a repeal-only proposal so far. The nonpartisan Congressional Budget Office has said the Better Care Reconciliation Act would have left 22 million more people uninsured by 2026, whereas simply repealing Obamacare without an immediate replacement would have resulted in 32 million more without health care insurance in the same time frame. The CBO estimated on Wednesday, at the request of Democrats, that a skinny repeal could result in 16 million more uninsured.

Earlier attempts to get that bill to the floor were stalled by a lack of support.

Collins and Murkowski, who voted Tuesday against even proceeding to debate, also came out against the repeal-only proposal on Wednesday. They were joined by Republicans Heller, Shelley Moore Capito of West Virginia, John McCain of Arizona, Rob Portman of Ohio and Lamar Alexander of Tennessee.

“I’m for repeal and replace, and we’re going to continue to work on replacement,” Portman said after Wednesday’s vote.

The ultimate outcome of both votes had been a foregone conclusion, says NPR’s Susan Davis. “This was really an exercise about forcing senators to lay their cards down on the table,” she tells All Things Considered. “We didn’t know where a lot of these senators were as a hard yes or no.”

As the debate moves forward, the Senate’s skinny repeal could be completely rewritten through the amendment process — and that is likely to play out over the next week, says Davis.

Republicans and Democrats alike will be able to offer unlimited amendments, as long as they’re germane to health care. “We expect hundreds of them will be offered to the bill. They will be whittled down from there,” Davis says. It’s a process known in the Senate as “vote-a-rama.”

Once that happens, Senate Majority Leader Mitch McConnell will need to take stock again to see which GOP senators he needs to get in line in order to pass a fully amended skinny repeal.

“The working strategy for Republicans is to get a lowest-common denominator — something they can all agree on in order to get enough support to move it to a conference committee,” where differences would have to be settled with the House, Davis says. Throughout the health care debate, Republican leadership has faced disagreement from both moderate and conservative members about how to proceed.

Democrats, meanwhile, are universally opposed to both measures and therefore sidelined in the debate. But one amendment proposed by Sen. Steve Daines, R-Mont., calls for a single-payer system — a move designed to get Democrats on the record. Some — such as Vermont independent Sen. Bernie Sanders, who typically caucuses with Democrats — would be happy to support the measure, whereas others facing tough re-election battles in 2018 might be less enthusiastic.