What McCain did was hard. What Murkowski and Collins did was much harder. 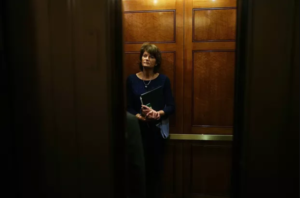 In the early-morning hours after Senate Republicans’ last-ditch attempt to repeal Obamacare failed, a common narrative began to emerge: that while three “no” votes from Republicans killed the bill, only Sen. John McCain (R-AZ) saved the day.

To be sure, McCain’s vote against the bill was dramatic and decisive. He flew back to Washington from Arizona less than two weeks after he was diagnosed with brain cancer, after having surgery to remove a blood clot from above his eye. He made a sweeping speechabout returning Senate procedure to a time of bipartisan, transparent cooperation. Then he proceeded to briefly horrify ACA proponents by voting yes on a motion to proceed vote, and yes again on the Republican Better Care Reconciliation Act.

So when McCain cast a performative last-minute vote against “skinny repeal,” it immediately overshadowed the two women Republican senators who did far more to halt Republicans’ reckless efforts to repeal Obamacare. Sens. Lisa Murkowski (AK) and Susan Collins (ME) repeatedly stood their ground against the three health bills their colleagues tried to ram through the Senate.

Both senators said they could not support bills that would leave millions of people without health insurance. They also opposed provisions to defund planned parenthood. When skinny repeal — seemingly the last shot for the GOP — came down, they stood their ground and voted no again.

Through all of this, the backlash against these two women senators was severe. Two House Republicans threatened them with violence.

Senator @lisamurkowski of the Great State of Alaska really let the Republicans, and our country, down yesterday. Too bad!

Murkowski then got a call from Interior Secretary Ryan Zinke, who reportedly threatened to punish Alaska’s economy based on her health care vote, according to the Alaska Dispatch News.

McCain’s vote was crucial in ending the latest health care repeal effort — but no more so than the votes of Murkowski and Collins, which were consistently courageous in the face of threats and suggestions of retaliation.

It was the most dramatic night in the United States Senate in recent history. Just ask the senators who witnessed it.

A seven-year quest to undo the Affordable Care Act collapsed — at least for now — as Sen. John McCain (R-Ariz.) kept his colleagues and the press corps in suspense over a little more than two hours late Thursday into early Friday.

Not since September 2008, when the House of Representatives rejected the Troubled Asset Relief Program — causing the Dow Jones industrial average to plunge nearly 800 points in a single afternoon — had such an unexpected vote caused such a striking twist.

The bold move by the nation’s most famous senator stunned his colleagues and possibly put the Senate on the verge of protracted bipartisan talks that McCain is unlikely to witness as he begins treatment for an aggressive form of brain cancer.

“I’ve stated time and time again that one of the major failures of Obamacare was that it was rammed through Congress by Democrats on a strict party-line basis without a single Republican vote,” he said in a statement explaining his vote. “We should not make the mistakes of the past.”

Rumors swirled late Thursday that the Arizona Republican, who had captured the nation’s sympathy this week after delaying his cancer treatment in order to return to Washington, might vote against the GOP’s “skinny repeal” plan — a watered-down version of earlier Republican proposals to repeal the 2010 health-care law.

McCain warned at a hastily arranged news conference Thursday afternoon that he was leaning against supporting the legislation unless House Speaker Paul D. Ryan (R-Wis.) assured GOP senators that the House would not move to quickly approve the bill in its current form. McCain and Sens. Lindsey O. Graham (R-S.C.) and Ron Johnson (R-Wis.) wanted Ryan to launch broad House-Senate negotiations for a wider rollback of the law. Two hours later, Ryan issued a statement signaling he would launch negotiations, and Graham and Johnson announced their support.

Reporters spotted him around 11 p.m.

“Have you decided how you’ll vote?” they asked.

McCain headed for the stage — the Senate floor — around midnight, emerging from his office in the Russell Senate Office Building for the subway ride to the U.S. Capitol.

When he arrived, he held a brief conversation with Senate Minority Leader Charles E. Schumer ( D-N.Y.), an exchange that left the New Yorker smiling.

“I knew it when he walked on the floor,” Schumer later recounted, explaining that McCain had already called to share his plans.

But few, if any, of his Republican colleagues realized what was about to transpire.

Two votes were called just after midnight. The first was on a Democratic proposal to refer the “skinny repeal” bill back to a committee. The second vote was to pass “skinny repeal,” which would have repealed the Affordable Care Act’s individual mandate and rolled back a tax on medical devices.

“Let’s vote against skinny repeal,” Schumer told his colleagues before the votes as he once again derided the rushed nature of the health-care debate.

McCain stood on the Republican side of the room nodding in agreement.

With Sens. Susan Collins (R-Maine) and Lisa Murkowski (R-Alaska) already planning to vote against the plan, Republicans could not afford to lose McCain. Vice President Pence was already at the Capitol prepared to break a tie. Instead, he launched a last-ditch effort to win McCain’s support.

As the first vote began, McCain took his seat next to Graham, his closest friend in the Senate. The South Carolinian mostly nodded as McCain gesticulated, and signaled — through his body language — that he was likely to vote no. When Murkowski walked over to join the conversation, McCain winked and gave her a thumbs down — signaling his intentions.

Collins joined the group as another clutch of Republican senators formed in the well of the Senate Chamber. Sen. Jeff Flake (R-Ariz.), who operates in McCain’s long shadow, stood next to Senate Majority Leader Mitch McConnell (R-Ky.), Sen. John Cornyn (R-Tex.), who counts GOP votes, and Pence. Eventually, Flake was dispatched to talk to McCain.

He obliged, walked over to McCain and asked Graham to move over one seat. But McCain did not acknowledge Flake, focusing instead on Murkowski and Collins.

That left Flake, one of the most polite members of the Senate, leaning into the conversation uncomfortably with a pained look on his face, as if he had to tell his father that he had run over the family dog with his car.

Seeing that Flake was not making progress, Pence walked over at 12:44 a.m. McCain smiled, pointed at Collins and Murkowski, said something about “marching orders,” and stood up.

“Mr. Vice President,” he said, greeting Pence. For the next 21 minutes, the vice president cajoled McCain, Collins and Murkowski. Twice during the conversation, a Pence aide came to whisper in the vice president’s ear — other reporters learned it was the White House calling. Pence finally left to take a call, but later returned to speak with McCain.

By then, other senators around the room realized what was happening.

“You could see the body language in the entire chamber change in two hours,” Sen. David Perdue (R-Ga.) recalled. “One side was kind of ebullient, moving around and talking and the other side was subdued, and all of a sudden it began to change. There was an instinctive reaction that maybe this thing wasn’t going to pass. Nobody knew for sure.”

At 1:10 a.m., McCain crossed the Senate Chamber to talk to Schumer, Klobuchar and other Democrats, including Sens. Richard J. Durbin (Ill.), Dianne Feinstein (Calif.) and Elizabeth Warren (Mass.). As he approached, McCain told them he worried that reporters watching from the gallery above could read his lips. When he realized that the press was indeed watching, he looked up at the ceiling and shouted, “No!” as senators and reporters laughed. Then, Democrats beamed when McCain shared his news. Feinstein gave him a hug.

Walking back to the Republican side of the room, McCain was stopped by Sen. Orrin Hatch (R-Utah) who also offered a hug.

“I love John McCain. He’s one of the great heroes of this country,” Hatch explained later. “Whether we agree or not, I still love the guy.”

The vote on “skinny repeal” began at 1:24 a.m., but McCain was out in the lobby once again conferring with Pence. In his absence, Collins and Murkowski cast their “no” votes along with the 48 members of the Democratic caucus.

McCain returned at 1:29 a.m. without Pence, approached the Senate clerk and gave a thumbs down — the third “no” vote.

Several people gasped. Others applauded. Reporters dashed out to report the news.

McCain returned to his seat, walking past Cornyn and Sens. John Thune (R-S.D.) and Bill Cassidy (R-La.), who stood grim-faced and despondent. Cassidy rubbed his face several times with his hands. Thune’s face contorted. The color in Cornyn’s face seemed to drain.

The vote concluded, and the results were announced — the bill was voted down, 51 to 49. Just days before, McCain had fired a warning shot with a lengthy floor speech that criticized the rushed, secretive process that led to “skinny repeal.” Early Friday morning, McCain, Collins and Murkowski delivered the fatal blow.

McConnell, humiliated by the results, stood to address his colleagues. The color of his face now matched the pink in his necktie.

“This is clearly a disappointing moment,” he said.