Prime Minister Shinzo Abe pushed through legislation allowing Japan to send troops to fight in overseas conflicts for the first time since World War II, after facing down a summer of protests that sank his popularity.

Parliament gave final passage of bills to allow the military to defend an ally under attack and take a bigger role in international peacekeeping. Abe says the measures will improve deterrence and protect the nation from growing regional threats. For critics, the bills could end seven decades of pacifism and risk drawing Japan into U.S.-led conflicts.

Thousands of people have been demonstrating in the rain outside parliament against the bills this week and opposition lawmakers used stall tactics to delay their passage. China was quick to respond to the outcome in a statement urging Japan to learn lesson from history. South Korea said the North Asia country should contribute to regional peace and stability.

Abe prevailed, tapping his coalition’s commanding majority to force through a reinterpretation of the country’s pacifist constitution in the biggest change to defense policy in 70 years. Abe faced fierce opposition in a nation still scarred by the suffering wrought by World War II and the atomic bombings of 1945 that have left many Japanese with a deep-seated aversion to military action.

“Pacifism is deeply embedded in Japanese national identity as a foundation for the peace and prosperity achieved in the postwar period,” said Jeff Kingston, director of Asian Studies at Temple University in Japan. “They know from relatives’ experiences about the folly of war launched by reckless leaders unconstrained by the law or constitution.”

The constitution that renounces war was drafted by the U.S. during its postwar occupation of the country. Seventy years after the conflict, Japan finds itself in a changed world. The nation is in range of North Korea’s ballistic missiles, faces the growing military muscle of neighboring China and is a target of international terrorism. Abe, knowing how difficult it would be to revise the top law, pushed the legislation to reinterpret its pacifist clause to permit collective self defense.

“This legislation is necessary to defend the lives and peaceful existence of our people and to prevent war,” Abe told reporters in a live broadcast by NHK after the bill’s passing. “I will be persistent and faithful in explaining this position” to the citizens. 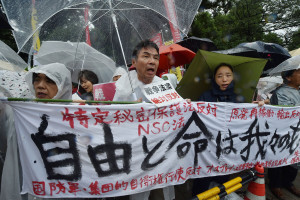 Demonstrators hold a banner as they stage a protest against Japanese Prime Minister Shinzo Abe’s controversial security bills in front of the National Diet in Tokyo on Thursday. Photographer: KAZUHIRO NOGI/AFP/Getty Images

More than 100,000 people demonstrated against the bills across Japan on Aug. 30 and thousands more returned to the streets outside parliament in Tokyo this week as the showdown over the legislation neared.

“Japan is a country that can’t say no to America,” said Misaki Takashima, a 51-year-old housewife at the protest, who braved sputtering Tokyo rain on Friday to voice her opposition. “I’m worried that because the U.S. is always fighting lots of wars and Japan may start fighting with them.”

Passing the bills would free Abe to return his focus to his plan to boost inflation and growth in Asia’s second-biggest economy, which remains on the brink of recession even after more than two years of fiscal and monetary stimulus. The fight over the security bills has dominated his agenda for months.

While public opposition was fierce, the bills have been welcomed by the U.S., which wants support from its biggest Asian ally to help balance China’s growing assertiveness in the region. Other governments in Asia are also largely supportive, apart from China and South Korea, which remain at loggerheads with Japan over territorial disputes and interpretations of history.

Japanese nationalists, who tend to support Abe’s Liberal Democratic Party, have longed chafed over constraints on the military. Abe took up the mantle for bolstering the defense forces from his grandfather, Nobusuke Kishi, who was accused of war crimes for his role in the colonization of parts of China and campaigned for constitutional change when he later served as prime minister.

Still, the country’s nationalists are in the minority, and the flap over the bills has pushed Abe’s popularity toward record lows. The slide doesn’t mean he’s in danger of being replaced. He was selected unopposed this month for a second three-year term as leader of the ruling Liberal Democratic Party, setting him on course to become the longest-serving premier since the 1970s. Backing for the opposition Democratic Party of Japan has barely nudged higher even with Abe’s slide.

A poll by public broadcaster NHK this month showed almost two-thirds of respondents didn’t believe Abe’s assertion the bills would make Japan safer. Support for the government in the poll stood at 43 percent, compared with 64 percent in January 2013, shortly after he took office.