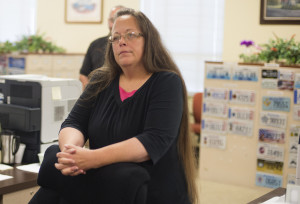 Kim Davis, the clerk of Rowan County in Kentucky, after refusing to grant a marriage certificate to Robbie Blankenship and Jesse Cruz on Wednesday. Credit Ty Wright/Getty Images

ASHLAND, Ky. — A federal judge here on Thursday ordered a Kentucky clerk jailed for contempt of court because of her refusal to issue marriage licenses to same-sex couples.

The clerk, Kim Davis of Rowan County, was ordered incarcerated after a hearing here before Judge David L. Bunning of Federal District Court. The contempt finding was another legal defeat for Ms. Davis, who has argued that she should not be forced to issue licenses that conflict with her religious beliefs.

“The court cannot condone the willful disobedience of its lawfully issued order,” Judge Bunning said. “If you give people the opportunity to choose which orders they follow, that’s what potentially causes problems.” 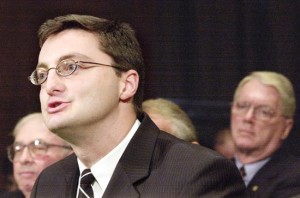 Judge Bunning said Ms. Davis would be released once she agreed to comply with his order and issue the marriage licenses.

On Monday, the Supreme Court turned down Ms. Davis’s appeal of an Aug. 12 ruling by Judge Bunning directing her to issue marriage licenses. The justices’ decision was expected to clear the way for same-sex marriages in Rowan County. But on Tuesday, the clerk and her employees again refused to issue licenses in Morehead, the seat of Rowan County.

The lawyers, who argued that Ms. Davis “continues to collect compensation from the Commonwealth for duties she fails to perform,” asked Judge Bunning to fine the clerk, but not to jail her.

On Wednesday, when Ms. Davis again turned down a gay couple’s request for a license, the clerk’s lawyers argued that she should not be held in contempt, in part because it would breach her right to due process. They asked Judge Bunning to grant an injunction pending another appeal.

Supporters and opponents of Ms. Davis gathered outside the federal courthouse here hours before she was due to appear. One man waved a rainbow flag — a symbol of the gay rights movement — while another clutched a flag that said, “Liberty.”

“We’re supporters of the rule of the law,” said David Wills, a computer programmer from West Virginia who was first in line and said he had arrived at 4 a.m. for a hearing scheduled to begin seven hours later. “It’s just really important to me that people be treated equally, fairly.”

Ms. Davis’s supporters, prepared with an ice chest filled with water, also gathered ahead of a hearing they called critical to protecting religious liberty in Kentucky and elsewhere.

“They’re taking rights away from Christians,” Danny Kinder, a 73-year-old retiree from Morehead, said of the courts. “They’ve overstepped their bounds.”

He declined to predict the outcome of Thursday’s hearing and what would happen to Ms. Davis.