The NAACP has responded to Missouri‘s recent legislation on discrimination by issuing a travel warning for the state. The advisory calls for travelers to utilize “extreme caution” in the state due to the likelihood of “discrimination and harassment,” CBS News reportedTuesday. Rod Chapel Jr., president of the state’s NAACP chapter, has described Republican Governor Eric Greitens’ recent legislation as “the Jim Crow bill,” a reference to the segregation tactics of the South.

The state’s legislation will make lawsuits alleging discrimination much more difficult to win, as victims will now have to present proof that discrimination was the main reason for a defendant’s actions. Previously, suits required proof that bias was a contributing factor. The bill also bars employees from suing any individual for discrimination, meaning only the company itself can be named in a suit.

“The advisory means each individual should pay special attention while in the state of Missouri and certainly if contemplating spending time in Missouri,” the NAACP said in a statement. The NAACP added that the advisory was put into place to make Missourians and visitors aware of “looming danger” in the state, which has a “long history of race, gender, and color-based crimes.” The travel advisory will be sent to the national NAACP board for ratification in October after being voted into adoption last week.

According to a report from the Kansas City Star, the advisory is the first of its kind from the civil rights group. “People need to be ready, whether it’s bringing bail money with them, or letting relatives know they are traveling through the state,” Chapel said. In 2015 alone, 100 hate crimes were reported in Missouri.

The NAACP highlighted a number of recent and troubling incidents in their statement, including the death of Tory Sanders in May. Sanders, a Tennessee resident, ran out of fuel in Charleston, Missouri after taking a drive to “clear his head.” The 28-year-old father of eight called his mother and asked if police could help him, the Riverfront Times reported in May.

Ultimately, Sanders’ interaction with cops included what they characterized as a “mental break.” Sanders’ aunt, Natasha Nance, said he told his mother on a phone call from jail that officers were “trying to kill” him. Sanders reportedly collapsed while officers attempted to restrain him and was later pronounced dead at a nearby hospital.

Read the NAACP’s (National Association for the Advancement of Colored People) full statement on the Missouri travel advisory here.

A reporter pressed the White House for data. That’s when things got tense.

Wednesday’s White House news briefing began not with press secretary Sarah Huckabee Sanders but with senior adviser Stephen Miller, whose nationalist immigration positions have been highly influential in the administration. Miller was at the lectern to discuss the Raise Act, legislation crafted by Sens. Tom Cotton (R-Ark.) and David Perdue (R-Ga.) and introduced by President Trump earlier in the day.

During his brief stint addressing the White House press corps, Miller got into two serious arguments with reporters, an impressive if not surprising accomplishment. One, with CNN’s Jim Acosta, included accusations of Acosta having a “cosmopolitan bias” in his thinking about immigration. (Worth noting: Acosta is the son of immigrants.) But the other, a dust-up with the New York Times’ Glenn Thrush, was more significant.

Before getting into that, though, it’s worth isolating part of Miller’s introduction to the topic, the sentence that formed the crux of his rhetoric in defense of a bill that will slice legal immigration in half if it is enacted into law.

“You’ve seen over time as a result of this historic flow of unskilled immigration,” Miller said, “a shift in wealth from the working class to wealthier corporations and businesses, and it’s been very unfair for American workers, but especially for immigrant workers, African American workers and Hispanic workers, and blue-collar workers in general across the country.”

That line does two things that are essential to Miller’s sales pitch. First, it blames income inequality — assuming that money headed to “wealthier corporations” means to those corporations’ owners — on increased immigration. Second, it highlights the effects on black, Hispanic and immigrant workers in particular. 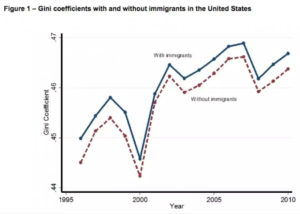 The effect of immigrants, the researchers say, is “modest.” But Miller presents the “shift in wealth” as being a “result” of the flow of unskilled immigrants. In other analyses of that increased gap, immigration isn’t mentioned.

Miller’s suggestion that those most affected by this shift are other communities of color, meanwhile, is a classic tactic aimed at appealing to working-class Americans and nonwhite voters by blaming immigrants for their problems. (Hillary Clinton did something similarduring a debate in the 2008 primaries.)

When Miller began to take questions, Thrush asked him very specifically for data to back up his points.

THRUSH: First of all, let’s have some statistics. There have been a lot of studies out there that don’t show a correlation between low-skilled immigration and the loss of jobs for native workers. Cite for me, if you could, one or two studies with specific numbers that prove the correlation between those two things, because your entire policy is based on that. …

MILLER: I think the most recent study I would point to is the study from George Borjas that he just did about the Mariel Boatlift. And he went back and reexamined and opened up the old data and talked about how it actually did reduce wages for workers who were living there at the time.

And Borjas has, of course, done enormous amounts of research on this, as has the — Peter Kirsanow on the U.S. Civil Rights Commission, as has Steve Camarota at the Center for Immigration Studies, and so on and so on.

We’ll jump in here first to note that Miller offered no statistics but did point to one study.

That study from Borjas looked at the migration of more than 100,000 Cubans into Florida in 1980. Borjas found that wages among the least-educated workers in Miami dropped 10 to 30 percent as a result of the influx. Borjas’s study was a direct rebuttal to a 1990 study by David Card, which found “virtually no effect” on wages or unemployment rates, even among the Cuban immigrant community that was already in the area.

Borjas’s study was itself soon rebutted, as the National Review noted, with researchers pointing out that he didn’t account for other demographic shifts in the area that may have had a significant effect on wages.

Miller also notes two other individuals, one of whom works for the staunchly anti-immigration Center for Immigration Studies — and then implies a surfeit of other data with a casual “and so on, and so on.”

THRUSH: What about the National Academies of Sciences, Engineering and Medicine? …

MILLER: One recent study said that as much as $300 billion a year may be lost as a result of our current immigration system, in terms of folks drawing more public benefits than they’re paying in.

Thrush raises a recent study showing that immigrants don’t take the jobs of native-born Americans, with the exception of teenagers who didn’t finish high school, who saw a drop in hours of work.

Miller responds by noting that the study also found that new immigrants cost nearly $300 billion a year more in government spending than they pay in taxes — though that’s the far end of a spectrum of estimates that starts at $43 billion. By the second generation, immigrant families add a net of $30 billion a year.

Then things got tense.

MILLER: But let’s also use common sense here, folks. At the end of the day, why do special interests want to bring in more low-skill workers? And why, historically …

THRUSH: I’m not asking for common sense. I’m asking for specific statistical data. How many …

THRUSH: Common sense is fungible, statistics are not.

THRUSH: Tell me the …

Again: He named one study. At this point, it got personal.

THRUSH: I asked you for a statistic. Can you tell me how many — how many …

MILLER: Glenn. The — maybe we’ll make a carve-out in the bill that says the New York Times can hire all the low-skilled, less-paid workers they want from other countries and see how you feel then about low-wage substitution. …

THRUSH: Stephen, I’m not questioning any of that. I’m asking …

MILLER: And ask them — ask them how this has affected their lives.

The exchange went on in this vein for a while, with Miller ultimately pointing not to statistical data showing a need for the policy but to general statistics about unemployment.

Ultimately, Miller again asked Thrush to set aside his request for data and to consider common sense.

“The reality is that if you just use common sense — and, yes, I will use common sense,” Miller said, “the reason why some companies want to bring in more unskilled labor is because they know that it drives down wages and reduces labor costs. Our question as a government is, to whom is our duty? Our duty is to U.S. citizens and U.S. workers, to promote rising wages for them.”

That raised an obvious question, which other reporters subsequently jumped on: Why do Trump’s private businesses continue to seek visas allowing them to hire immigrants for low-wage jobs?

“I’ll just refer everyone here today back to the president’s comments during the primary, when this was raised in a debate,” Miller replied, “and he said: ‘My job as a businessman is to follow the laws of the United States. And my job as president is to create an immigration system that works for American workers.’ ” 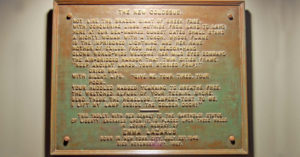 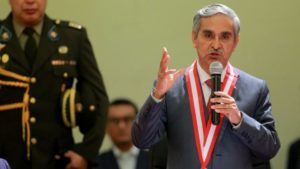 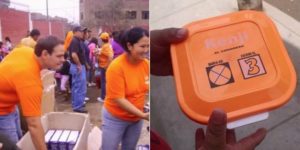 Donald Trump to push for new limits on immigration, system based on skills, merit

WASHINGTON – President Donald Trump plans to join with two Republican senators to unveil legislation that would place new limits on legal immigration. It would seek an immigration system based on merit and jobs skills instead of family connections.

Trump was appearing with Republican Sens. David Perdue of Georgia and Tom Cotton of Arkansas at the White House on Wednesday to discuss the bill. The president said at an Ohio rally last month that he was working with the conservative senators to “create a new immigration system for America.”

Trump has made cracking down on illegal immigration a hallmark of his administration and has tried to slash federal grants for cities that refuse to comply with federal efforts to detain and deport those living in the country illegally.

His involvement will put him at the centre of efforts to make changes to the legal immigration system. Previewing the event, White House officials said the bill would aim to create a skills-based immigration system to make the U.S. more competitive, raise wages and create jobs.

The White House said that only 1 in 15 immigrants comes to the U.S. because of their skills, and the current system fails to place a priority on highly skilled immigrants.

Perdue and Cotton introduced the legislation in February that would change the 1965 law to reduce the number of legal immigrants, limiting the number of people able to obtain green cards to join families already in the United States.

The bill would also aim to slash the number of refugees in half and eliminate a program that provides visas to countries with low rates of immigration.

Trump’s appearance was aimed at bringing attention to the bill, which has been largely ignored in the Senate, with no other lawmaker signing on as a co-sponsor. GOP leaders have showed no inclination to vote on immigration this year.

Some immigrant advocates have criticized the proposal, saying that slashing legal immigration would hurt industries like agriculture and harm the economy.

“Our system is broken, but the response should be to modernize it, not take a sledgehammer to it,” said Jeremy Robbins, executive director of New American Economy, a group of business leaders, mayors and others backed by former New York City Mayor Michael Bloomberg that advocates for comprehensive immigration reform.