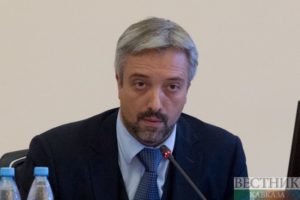 Primakov said that they will focus on helping the most ‘needy republics’.

‘We are constantly expanding our geographic range and will soon be working in Armenia and Georgia’, he said on 9 June, claiming that the RHM is developing several projects involving healthcare, educational assistance, and technical assistance in agriculture.

‘All of them are being developed: first, we assess needs and logistic chains, and only after that do we start implementing programmes’, Primakov added.

Georgian Foreign Minister Mikheil Janelidze denied on 12 June that the Georgian government has any connection with the RHM’s entry into Georgia, claiming he only heard about the move via the media.

‘There has been no cooperation, no connection [from the RHM] with the government of Georgia’, Janelidze stressed.

Georgian media outlet Rustavi2 quoted deputy leader of the the opposition European Georgia party, Giga Bokeria, as referring to the RHM as ‘so-called humanitarian aid’, claiming that Georgia’s government is ‘doing nothing to hinder Russian influence’ and soft power.

Primakov stated that the RHM’s programmes ‘are not relevant for Azerbaijan’, as ‘the Azerbaijani authorities are doing well’. However, he did not exclude future cooperation with Azerbaijan.

‘We would like to work there [in Azerbaijan] in the field of education and cultural cooperation’, Primakov told Vestik Kavkaza.