Blogger’s opinion: I don’t think so, because ghost cities are only a a phase of the urbanization process in China. See: The “ghost towns”, the paradoxical strategy of Chinese urbanization. 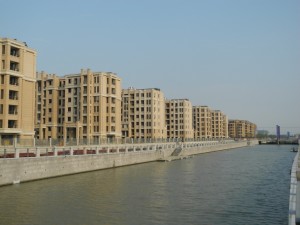 These vacant apartments in the Pujiang area of Shanghai appear to be unwanted supply for non-existing demand but they’re actually new homes for residents who were evicted from the World Expo site. WADE SHEPARD FOR REUTERS

Nearly 150,000 Syrian refugees have already claimed asylum in Europe and tens of thousands more are flooding the borders in search of places to live. Meanwhile, in China, there are millions of new apartments sitting completely empty and entire sections of freshly constructed cities that are virtually uninhabited. This disparity between unmet housing need and oversupply has not been lost on many around the world, and after writing a book about China’s ghost cities, I’ve recently found my email inbox getting flooded with suggestions such as this:

Do you think the Ghost Cities could be used, even as a temporary situation, to accommodate those displaced from Syria? It seems that many of the cities are just waiting for a community and here is a community that needs a city.

This sentiment is widespread across popular social media platforms, and on Twitter alone roughly 7 out of 10 results for searches pertaining to China’s ghost cities reveal tweets recommending the mass movement of Syrian refugees to these under-populated urban terrains.

Really believe the Refugees fleeing the War.could be moved to the Ghost Cities of China.ready for Maybe Millions https://t.co/A7grc1G43c

Realistically speaking, this suggestion isn’t worth analyzing with much depth. The political quagmire of relocating masses of people across the planet — not to mention the fact that refugees need more than just housing — means that this is a far greater ordeal than simply assuaging demand with supply. It does shed light, though, on the gulf that exists between the predominant international opinion on China’s so-called ghost cities and their present reality.

Even though there are between 20 and 45 million unoccupied homes across China, which account for roughly 600 million square meters of uninhabited floor space — enough to completely cover Madrid — these places are not the urban wastelands they are often posited to be. While many of China’s new cities and urban districts are deficient in people they are not deficient in owners. Nearly every apartment that goes on the market in China is quickly purchased, often at exorbitant prices that commonly range into the hundreds of thousands of dollars. Far from being unwanted infrastructure that could seamlessly be doled out to refugees, those arrays of vacant high-rises are actually the proud possessions of people who paid a lot of money for them.

So why would anyone spend incredible amounts of cash on houses they do not intent to use?

All over the world, the value of property extends beyond the utilitarian function of being a place to live. Real estate is also a vital economic entity that presents an avenue for investment as well as a way of storing wealth — a use of property that is taken to the extreme in China. “Many Chinese investors are buying property based on expectations of appreciation, and that it is a solid, safe investment that they can easily understand,” said Mark Tanner, the founding director of China Skinny, a Shanghai based marketing research firm.

A full 39 percent of individual wealth in China is kept in housing, and, according to Nomura, 21 percent of China’s urban households possess more than one home. The reasons for this desire to invest in housing often results from a lack of better options. China’s banks pay negative interest and are becoming even more unattractive with the recent wave of currency devaluation. Wealth management products are not fully developed and are highly regulated by the government, and the stock market is viewed to be about as secure as a casino.

A huge portion of the homes that are purchased in China function very much like stocks or a trade-able commodity. As an incredible number of new apartments are sold as unfinished concrete cavities without any interior fit out or even windows, they are in no way immediately livable. Strange as it may seem, they are very actively bought and sold in this bare-bones form. In fact, investors often prefer them that way. In many ways they are purely economic entities, quantifiable placeholders of value that are traded on the open market akin to precious metals. Just as one doesn’t need to mold a piece of gold into something usable, like a piece of jewelry, for it to have value and an economic function, an apartment in China doesn’t need to have people living in it for it to be economically viable.

Another reason for the sheer number of unused apartments in China is the fact that there is often little financial incentive for owners to do anything with them after purchase. There is no yearly property tax in China, so vacant properties are not a financial drain on their owners. While the potential returns that could be had from renting them out (1 percent or so) is often not worth the hassle — especially because it costs tens of thousands of dollars to construct the interiors of new apartments in preparation for tenants. This is combined with the fact that Chinese homeowners, especially investors who have multiple properties, are remarkably un-leveraged. According to Mark Tanner, over 80 percent of homes in China are owned outright. This means that most homeowners, especially the big investors with multiple properties, generally don’t have any mortgages to pay off or any other leans, so there isn’t as much financial pressure to make a profit from these homes in the short term.

Additionally many empty apartments have owners who intend to occupy them at some point. A huge number of China’s new apartments are located in new development areas, which are, by definition, new. The thinking is if you buy property in these emerging new areas early, you can get a better price. So it’s common for people to purchase homes in places that are not yet ready to support a large population with the understanding that they won’t be able to inhabit them for many years. As these new urban developments grow and evolve, more and more people eventually move into their homes. According to a report by Standard Chartered, between 2012 and 2014 the occupancy rate of Zhengzhou’s Zhengdong New District — prominently featured in a 60 Minutes segment on ghost cities — doubled, while the population in Zhenjiang’s Dantu district quadrupled, and occupancy in Changzhou’s new Wujin district increased more than twofold. As new areas develop, the facilities, institutions, infrastructure and businesses they need to be attractive to residents, vacant homes begin filling up as ghost cities come alive.