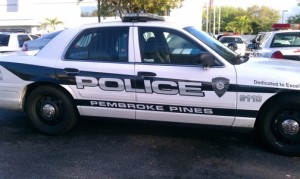 PEMBROKE PINES (CBS12) — The chief of the Pembroke Pines Police Department says Arby’s has apologized for one of its workers who denied serving a police officer.

Chief Dan Giustino said one of his officers was denied service Monday night at the Arby’s on Pines Boulevard, just because she was an officer.

Sgt. J. Martin wrote in her report that the manager, Angel Mirabal, informed her at the take-out window that the clerk “doesn’t want to serve you because you are a police officer.”

Martin said Mirabal even laughed and said the clerk is allowed to refuse her service, according to the police report obtained by CBS12.

“I am offended and appalled that an individual within our community would treat a police officer in such a manner,” said Giustino.

Martin, uncertain of the condition of her food and fearing for her safety, decided to go inside for a refund and eat somewhere else.

“We are very proud of the partnerships we have built within our city, and for an incident like this to have happened is very disappointing for everyone,” said Giustino.

The police department wrote on its Facebook page that Chief Giustino spoke with the CEO of Arby’s and “we understand that this incident does not reflect the company as a whole.”

“We take this isolated matter very seriously as we respect and support police officers in our local communities. As soon as the issue was brought to our attention, our CEO spoke with the Police Chief who expressed his gratitude for our quick action and indicated the case is closed. We will be following up with our team members to be sure that our policy of inclusion is understood and adhered to. Further, we will be following through with disciplinary action up to and including termination of the employees involved, as appropriate.”

On a brighter note, police said earlier in the day officers received a visit from a mother and daughter. They dropped off a batch of cookies and a “thank you” card to show their appreciation.