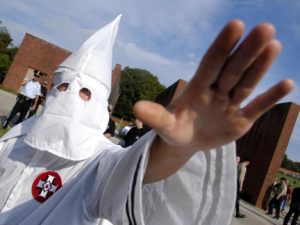 The former Imperial Wizard of the Ku Klux Klan tweeted “we did it” during Donald Trump’s inauguration.

David Duke, who served one term as the Louisiana State Representative, also “hailed” Mr Trump and praised him for “declaring war” on the “Jewish establishment”.

Mr Duke, who once led the neo-Nazi white-supremacist organisation, had endorsed Mr Trump from the start of the presidential campaign.

He had previously said Mr Trump’s presidency would be a “real opportunity” for white nationalists.

“If Trump does win, okay, it’s going to be a real opportunity for people like white nationalists, acting intelligently to build upon that,” Mr Duke said.

We did it! Congratulation Donald J. Trump President of the United States of America!

Trump Dares to Use the "W" word. Pols will name Blacks, Browns, Jews, but not dare include white people. Trump Speech includes the W WORD!

During the presidential campaign, Mr Trump hesitantly denounced Mr Duke and the KKK.

He described Mr Duke as a “bad person”.

As Mr Trump was sworn in as US President masked protestors clashed with police.

In his first speech as President, Mr Trump said power would be transferred from Washington to “the people”.

“We the citizens of America are now joined in a great national effort to rebuild our country and restore its promise for all of our people. Together we will determine the course of America and all of the world for many many years to come,” Mr Trump said.