“To have a popular government we must, first of all, and before all else, have good citizens.”
—Charles Joseph Bonaparte 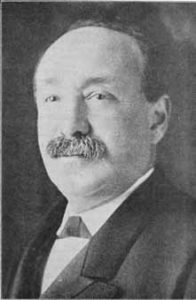 Charles Joseph Bonaparte was born in Baltimore, Maryland, on June 9, 1851. He graduated from Harvard College in 1871 and from Harvard Law School in 1874. He was admitted to the Maryland bar. Bonaparte was appointed a member of the Board of Indian Commissioners in 1902. For a number of years he was a member of the Board of Overseers of Harvard College, and was one of the organizers and president of the National Municipal League. For several years he was chairman of the Council of the National Civil Service Reform League. Bonaparte was a presidential elector for Maryland on the Republican ticket in 1904, the only Republican elected. On July 1, 1905, he was appointed Secretary of the Navy. President Roosevelt appointed him Attorney General of the United States on December 17, 1906, which office he held until March 4, 1909. He died at his estate, Bella Vista, near Baltimore, on June 28, 1921.

Bonaparte was born in Baltimore, Maryland on June 9, 1851, the son of Jerome (“Bo”) Napoleon Bonaparte, (1805–1870) and Susan May Williams (1812–1881), from whom the American line of the Bonaparte family descended, and a grandson of Jérôme Bonaparte, the youngest brother of French Emperor Napoleon I and King of Westphalia, 1807–1813. However, the American Bonapartes were not considered part of the dynasty and never used any titles.

Charles Joseph Bonaparte, who served as U.S. attorney general under president theodore roosevelt, was one of the organizers of the Civic Reform League and the National Municipal League, and he helped to found a Special Agents Force within the justice department that was the forerunner of the federal bureau of investigation (FBI).

A grandson of Jerome Bonaparte, who was Napoleon’s youngest brother, Charles Joseph Bonaparte was born in Baltimore, Maryland, on July 9, 1851. After graduating from Harvard College in 1871, he attended Harvard Law School, graduating in 1874. Bonaparte returned to Baltimore and established a private practice. At the time, public corruption of elected officials was widespread in the United States and the political situation in Maryland was considered to be the worst in the country. Bonaparte, of Italian-American descent, became interested in civic reform, commenting in an article published in Forum magazine that the politicians of that period if not technically criminals themselves, were the “allies and patrons of habitual lawbreakers.”

A Texas couple is suing Apple, claiming that its FaceTime app distracted a driver who rammed into the couple’s car, killing their 5-year-old daughter.

Parents James and Bethany Modisette are suing Apple for damages on the basis that the electronics giant failed to install and implement a “safer, alternative design” for FaceTime that would have helped to prevent a driver from using the app while traveling at highway speed, court documents show.

The lawsuit filed Dec. 23 in California Superior Court in Santa Clara County also claims that Apple failed “to warn users that the product was likely to be dangerous when used or misused” or to instruct on its safe usage.

The fatal accident occurred Christmas Eve in 2014 near Dallas, when, according to the lawsuit, the Modisette family was driving in a Toyota Camry, with daughter Moriah, 5, in a booster seat in the left rear passenger seat and her sister, Isabella, next to her in the right rear seat.

The Modisettes had slowed or stopped their car due to police activity ahead of them on the highway that had caused traffic to back up, according to the suit.

Another driver, Garrett Wilhelm, traveling in his Toyota 4Runner in the same direction and behind the Modisette car, allegedly had his attention diverted by his use of the FaceTime app, the suit says.

“As a result of that distraction, his Toyota 4Runner, while traveling at full highway speed (65 mph), struck the Modisette family car from behind, causing it to be propelled forward, rotate, and come to a final rest at an angle facing the wrong direction in the right lane of traffic,” the suit says.

Wilhelm’s car then “continued its trajectory by rolling up and over the driver’s side of the Modisette car,” the suit claims.

The crash caused extensive damage to the driver’s side of the Modisettes’ car, and rescue workers had to extract both the father and 5-year-old Moriah from the car, the suit says.

The father was in critical condition after the crash while the mother and daughter Isabella were taken to a regional medical center to be treated for injuries. Moriah was airlifted to the area children’s hospital where she later died from her injuries, according to the suit.

The Modisettes contend in their suit that, “At the time of the collision in question, the iPhone utilized by Wilhelm contained the necessary hardware (to be configured with software) to automatically disable or ‘lock-out’ the ability to use [FaceTime] … However, Apple failed to configure the iPhone to automatically ‘lock-out’ the ability to utilize ‘FaceTime’ while driving at highway speeds, despite having the technical capability to do so.”

Wilhelm was indicted on manslaughter charges by a grand jury in Denton County, Texas, according to the Denton Record-Chronicle. He has been out of jail on bail since August, and a jury trial in the case is scheduled for Feb. 27, the Record-Chronicle reports.

Wilhelm’s lawyer, Ricky Perritt, issued the follow statement: “The Wilhelm family offers their thoughts and prayers for the family of the young lady who lost her life in this tragic accident. We are confident that after all the facts are brought out in Court, it will be shown that the use of a cellular device did not contribute and Mr. Wilhelm did not commit a crime … it was simply an accident.”

ABC News reached out to Apple but did not receive a comment on the case.

Carrie and I occupied a unique area in each other’s lives. It was like we were in a garage band together that somehow hit it huge. We had no idea the impact Star Wars would have on the world. I remember we were out on tour right before the movie opened. By the time we got to Chicago, there was a crowd at the airport. I said, ‘Hey look, you guys, there must be somebody famous on the plane.” I was looking around to see who it might be. And then in the crowd I saw a kid dressed in a Han Solo vest. Then I saw girl dressed like Princess Leia. I said, “Oh my God, look, Carrie, there’s somebody dressed just like you. She’s got the buns on her head!”

The first time I met Carrie was at dinner in London before we started filming together. I had been the first one to go over to Africa with Sir Alec Guinness and the robots, to do all the desert planet stuff, then I came back to London and then Harrison Ford came over. Carrie was the last piece in the puzzle to come to London. So I said to the production office, “I’d like to meet her before we work together.” They worked out that we’d meet for dinner. You know, she was 19 years old at the time. I was a worldly 24. So I was thinking, “Oh my God, it’ll be like working with a high school kid.” But I was just bowled over. I mean she was just so instantly ingratiating and funny and outspoken. She had a way of just being so brutally candid. I’d just met her but it was like talking to a person you’d known for ten years. She was telling me stuff about her stepfather, about her mom, about Eddie Fisher — it was just harrowing in its detail. I kept thinking, “Should I know this?” I mean, I wouldn’t have shared that with somebody that I had trusted for years and years and years. But she was the opposite. She just sucked you into her world.

I was so middle class. Growing up, the closest thing to a celebrity we had was our next door neighbor, who was a baggage handler who returned Jerry Lewis’ wallet that fell on the tarmac in San Diego. But Carrie was something completely different. She dropped out of high school to be in the chorus of “Irene” on Broadway. I was just in awe of her.

She was so committed to joy and fun and embracing life. She had an Auntie Mame quality to her. I would do crazy things to amuse her on the set. Making her laugh was always a badge of honor. I remember during Empire we were split up storywise; it was a difficult film to shot and there was a lot of tension on the set. I was off in the swampland with the puppets and robots, but at least Carrie and Harrison got to work with human beings. Once at lunchtime she said, “You should try on my jumpsuit.” I said, “The one-piece white jumpsuit? You’re what, 5’2”? I’ll never get in!” She said, “Just try.” I put on that Princess Leia zipper jump suit and it was so tight I looked like a Vegas lounge singer. If that wasn’t ridiculous enough, she had me put on one of those bald cap masks with the Bozo hair and glasses and nose and then she walked me around the back lot.

The lengths I would go to hear her laugh — there were no limits. I loved her and loved making her laugh. She would do these crazy things and make me do these crazy things, but I really don’t think they were crazy after all. In a way, it was a defense mechanism for her. She was so off the wall, she could use it as protection. Part of what was so poignant about her was that she was vulnerable, that there was this glimmer of a little girl that was so appealing and it roused the protective nature in my personality.

I’m grateful that we stayed friends and got to have this second act with the new movies. I think it was reassuring to her that I was there, the same person, that she could trust me, as critical as we could sometimes be with each other. We ran the gamut over the years, where we were in love with each other, where we hated each other’s guts. “I’m not speaking to you, you’re such a judgmental, royal brat!” We went through it all. It’s like we were a family.

When you were in her good graces, you couldn’t have more fun with any person on the planet. She was able to make you feel like you were the most important thing in her life. I think that’s a really rare quality. And then you could go 180 degrees opposite, where you were furious with one another and wouldn’t speak for weeks and weeks. But that’s all part of what makes a relationship complete. It’s not all one sided. Like I say, she was a handful. She was high maintenance. But my life would have been so much drabber and less interesting if she hadn’t been the friend that she was.