How To Stop Windows 10 From Automatically Downloading & Installing Updates

[This] “law is one of four ‘protection laws’ that would affect religious conversion, interfaith marriage, polygamy and population control. These bills, collectively known as the ‘protection of race and religion laws,’ were proposed in 2013 by Ma Ba Tha, a group of nationalistic Buddhist monks.” (washingtonpost.com) 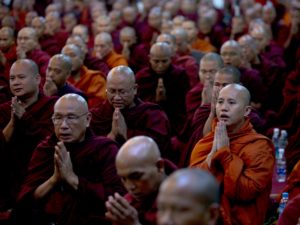 Human rights groups are blasting a new law adopted last week in Myanmar, also known as Burma, requiring women to register their intent to marry outside their faith. The legislation gives the government power to halt the marriage of a Buddhist woman to a non-Buddhist man if someone raises objections to the union.

Myanmar’s new marriage law is the second of a four-part series of bills known as the Protection of Race and Religion Laws, drafted by hardliner Buddhist monks with a staunch anti-Muslim agenda.

In May, President Thein Sein enacted the first of these laws, a population control bill mandating a 36-month gap between children for certain mothers and giving regional authorities the power to implement birth spacing in overcrowded areas. Some argue the legislation is aimed at curbing high birth rates in the Muslim community. The population bill is vague about the penalty for unauthorized births less than three years apart, but it could include coerced contraception, forced sterilization, or abortion.

For a non-Buddhist man in Myanmar, stepping into an interfaith marriage could prove ruinous. According to a recent Human Rights Watch report, the marriage legislation prohibits husbands from “committing deliberate and malicious acts, such as writing, or speaking, or behaving, or gesturing with intent to outrage feelings of Buddhists.” Noncompliance is considered a divorce-worthy offense, sweeping away the man’s land and child custody rights, and punishable with a prison stint of up to four years.

In November, when Sein first sent a draft of the bill to Parliament, The Myanmar Times reported some women’s disapproval.

“We already have restrictions on marriage because we need to marry in the same faith and caste,” said one Burmese woman, who requested anonymity. “I’m curious how this law will actually protect Buddhist women.”

The marriage act changes little for Myanmar’s Rohingya Muslims, one of the most severely oppressed minority groups in the world. Denied citizenship within Burmese borders, the Rohingya are essentially stateless and already face tight restrictions on the right to register marriages, births, and deaths. Since 2012, heavy persecution of minority Rohingya Muslims by radical Buddhist groups has sparked a maritime mass exodus and regional refugee crisis.

By signing the interfaith marriage bill into law, “the [Myanmar] government and ruling party lawmakers are playing with fire,” Robertson said. With the landscape of this Buddhist-majority nation increasingly stained by sectarian violence, legislators risk much by proposing such inflammatory restrictions. The marriage bill, like the population control bill before it, will only add fuel to Myanmar’s simmering religious tension.

The pending half of Myanmar’s Protection of Race and Religion Laws include a monogamy bill criminalizing extramarital affairs and a bill requiring government registration and approval prior to religious conversion.

The Associated Press contributed to this report.

28 Jul 2014: Women unite against ethnic and gender discrimination in Myanmar

06 May 2014: Women of Burma speak out against Interfaith Marriage Act

12 Weird Things Our Ancestors Did

A New, More Rigorous Study Confirms: The More You Use Facebook, the Worse You Feel

The average Facebook user spends almost an hour on the site every day, according to data provided by the company last year. A Deloitte survey found that for many smartphone users, checking social media apps are the first thing they do in the morning – often before even getting out of bed. Of course, social interaction is a healthy and necessary part of human existence. Thousands of studies have concluded that most human beings thrive when they have strong, positive relationships with other human beings.

The challenge is that most of the work on social interaction has been conducted using “real world,” face-to-face social networks, in contrast to the types of online relationships that are increasingly common. So, while we know that old-fashioned social interaction is healthy, what about social interaction that is completely mediated through an electronic screen? When you wake up in the morning and tap on that little blue icon, what impact does it have on you?

Prior research has shown that the use of social media may detract from face-to-face relationships, reduce investment in meaningful activities, increase sedentary behavior by encouraging more screen time, lead to internet addiction, and erode self-esteem through unfavorable social comparison. Self-comparison can be a strong influence on human behavior, and because people tend to display the most positive aspects of their lives on social media, it is possible for an individual to believe that their own life compares negatively to what they see presented by others. But some skeptics have wondered if perhaps people with lower well-being are more likely to use social media, rather than social media causing lower well-being. Moreover, other studies have found that social media use has a positive impact on well-being through increased social support and reinforcement of real world relationships.

We wanted to get a clearer picture of the relationship between social media use and well-being. In our study, we used three waves of data from 5,208 adults from a national longitudinal panel maintained by the Gallup organization, coupled with several different measures of Facebook usage, to see how well-being changed over time in association with Facebook use. Our measures of well-being included life satisfaction, self-reported mental health, self-reported physical health, and body-mass index (BMI). Our measures of Facebook use included liking others’ posts, creating one’s own posts, and clicking on links. We also had measures of respondents’ real-world social networks. In each wave, respondents were asked to name up to four friends with whom they discuss important matters and up to four friends with whom they spend their free time, so that each participant could name up to a total of eight unique individuals.

Our approach had three strengths that set it apart from most of the previous work on the topic. First, we had three waves of data for many of our respondents over a period of two years. This allowed us to track how changes in social media use were associated with changes in well-being. Most studies done to date only use one period of data, limiting interpretations of conclusions to simple associations. Second, we had objective measures of Facebook use, pulled directly from participants’ Facebook accounts, rather than measures based on a person’s self-report. Third, in addition to the Facebook data, we had information regarding the respondents’ real-world social networks, which would allow us to directly compare the two influences (face-to-face networks and online interactions). Of course, our study has limitations too, including that we could not be certain about how fully representative it was because not everyone in the Gallup sample allowed us access to their Facebook data.

Overall, our results showed that, while real-world social networks were positively associated with overall well-being, the use of Facebook was negatively associated with overall well-being. These results were particularly strong for mental health; most measures of Facebook use in one year predicted a decrease in mental health in a later year. We found consistently that both liking others’ content and clicking links significantly predicted a subsequent reduction in self-reported physical health, mental health, and life satisfaction.

Although we can show that Facebook use seems to lead to diminished well-being, we cannot definitively say how that occurs. We did not see much difference between the three types of activity we measured — liking, posting, and clicking links, (although liking and clicking were more consistently significant) — and the impact on the user. This was interesting, because while we expected that “liking” other people’s content would be more likely to lead to negative self-comparisons and thus decreases in well-being, updating one’s own status and clicking links seemed to have a similar effect (although the nature of status updates can ostensibly be the result of social comparison-tailoring your own Facebook image based on how others will perceive it). Overall our results suggests that well-being declines are also matter of quantity of use rather than only quality of use. If this is the case, our results contrast with previousresearch arguing that the quantity of social media interaction is irrelevant, and that only the quality of those interactions matter.

These results then may be relevant for other forms of social media. While many platforms expose the user to the sort of polished profiles of others that can lead to negative self-comparison, the issue of quantity of usage will be an issue for any social media platform. While screen time in general can be problematic, the tricky thing about social media is that while we are using it, we get the impression that we are engaging in meaningful social interaction. Our results suggest that the nature and quality of this sort of connection is no substitute for the real world interaction we need for a healthy life.

The full story when it comes to online social media use is surely complex. Exposure to the carefully curated images from others’ lives leads to negative self-comparison, and the sheer quantity of social media interaction may detract from more meaningful real-life experiences. What seems quite clear, however, is that online social interactions are no substitute for the real thing.