The U.S. has been the tortoise in a global race for economic growth, plodding out a slow but steady expansion while China signals exhaustion and the rest of the world wobbles. Now, market turmoil and China’s troubles threaten to undermine the already unspectacular U.S. outlook.

But an uneven global growth outlook is pushing the value of the dollar higher, making U.S. goods more expensive overseas and harder to export. That could restrain the U.S. economy in the months ahead. Stock-market declines could further hurt U.S. consumer sentiment and spending, if the drops are sustained, and they make businesses even less willing to invest.

Federal Reserve officials now need to decide if they should alter their planned course on interest rates. Officials have been signaling for months that at least one increase in short-term rates is likely this year, possibly as soon as September.

Now, Fed officials might rethink the timing and pace of their plans, thanks to an uncertain growth and inflation outlook. In futures markets, investors put the odds of a rate increase in September at just 24%, according to the Chicago Mercantile Exchange; a week ago, it was rated a tossup.

The stakes are high. Asset values could tumble without the support of continued low rates. Investors also worry policy makers lack tools to intervene in the economy should it sink again.

Atlanta Fed President Dennis Lockhart, who said earlier this month he was inclined to move rates up in September, said in a speech on Monday that he sees an increase this year, but he avoided attaching a date to it.

“The Fed should not be raising rates,” said Lawrence Summers, a Harvard University professor and former Obama administration adviser, in an interview. “It should be thinking about its contingency plans if financial distress becomes serious. It should signal that it won’t be raising rates until and unless it sees clear evidence of inflation breaking above 2% or clear evidence of euphoria in financial markets.”

Such views increase public pressure on Fed Chairwoman Janet Yellen to stand pat. Merely talking about rate increases in the absence of inflation or a financial boom would be counterproductive at this point, Mr. Summers said. 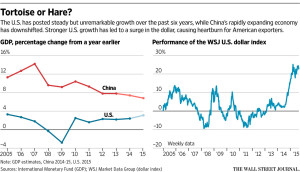 Investors, struggling to make sense of a resilient U.S. economy buffeted by threats from abroad, went both ways on Monday. The Dow Jones Industrial Average dropped more than 1000 points at its open, reversed course, drifted lower again and closed down almost 600 points.

“People are scratching their heads how the economy is doing better as markets are doing worse,” said David Rosenberg, chief economist at money-management firm Gluskin Sheff & Associates. “The markets and the economy don’t always have to correlate at any given point in time.”

The U.S. has managed 2.1% annual growth since emerging from recession in 2009, rarely veering much above or below that pace, even when China slowed and Japan and Europe experienced secondary downturns.

The sluggish U.S. expansion has unfolded amid unprecedented support from the Fed, which has kept its benchmark federal-funds rate pinned near zero since December 2008 and launched several rounds of bond-buying programs to boost investment.

Economists surveyed by The Wall Street Journal expect the Commerce Department to report later this week that U.S. economic output expanded at a 3.3% annual rate in the second quarter, faster than previously reported.