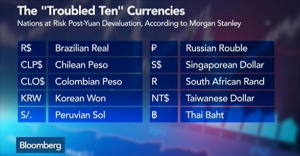 Emerging-market currencies fell, extending the longest stretch of weekly declines since 2000, as Malaysian assets tumbled, Turkey’s lira touched a record low for a third day and the ruble and Russian stocks retreated with oil.

A gauge tracking 20 of the most-traded developing-nation currencies dropped 0.3 percent. The ringgit weakened to the lowest level since 1998 and the Taiwanese dollar lost 0.9 percent. The currency measure has fallen eight straight weeks as the prospect for higher U.S. interest rates and the shock devaluation of the yuan magnified the risks facing developing nations. The MSCI Emerging Markets Index of equities decreased to a four-year low and bonds fell.

China’s devaluation “will be something that will shape the rest of the year for emerging-market currencies, especially the fact that people view this as a clear indication that the Chinese authorities are worried about the state of their economy,” said Anders Svendsen, an analyst at Nordea Bank A/S in Copenhagen.

Svendsen expects emerging currencies will stay lower for the rest of 2015, with a trough around the time the Federal Reserve lifts interest rates, probably in September. Underpinning the potential fallout of a weaker yuan on countries that export to China, Morgan Stanley dubbed Brazil’s real, Peru’s sol and Asian currencies in South Korea, Thailand and Singapore as part of the “Troubled Ten.” China is the biggest export destination for all these nations, data compiled by Bloomberg show.

Goldman Sachs Group Inc. lowered its forecasts for the yuan on Monday, saying slower growth in the world’s second-largest economy will heave pressure on the currency. The yuan will decline to 6.60 per dollar in 12 months, from 6.3947 per dollar today, Goldman said, adding that a “few small steps” for the currency may trigger a “big leap lower” for peers in developing countries.

U.S. exchange-traded funds that invest in emerging economies have registered losses for seven weeks in a row. The MSCI Emerging Markets Index retreated 1.2 percent to 853.35 by 2:44 p.m. in London.

Bonds also sold off on Monday, with the premium investors requiring to own emerging-market debt over U.S. Treasuries climbing four basis points to 383, according to JPMorgan Chase & Co. indexes. Malaysian debt underperformed peers in Asia and Turkish notes led declines in emerging Europe. Both countries have been rattled with political crises that are driving out investors.

In Turkey, where coalition talks failed last week, the Borsa Istanbul 100 Index headed for the lowest close since October and the lira slid to as weak as 2.8613 per dollar, an all-time low. Malaysian shares sank to a three-year low and the ringgit depreciated 0.5 percent to 4.0995 per dollar. The currency’s steepest weekly slide since 1998 is evoking memories of the clash between then-Prime Minister Mahathir Mohamad and hedge-fund manager George Soros.

As oil resumed its decline in the U.S. to a near six-year low, Russia’s ruble — also listed among the so-called Troubled Ten — retreated 0.6 percent to 65.38 against the greenback. The dollar-denominated RTS Index of equities fell 2.2 percent, while the Nigerian Stock Exchange All Share Index decreased 2.6 percent.

“Outflows will continue from emerging markets until the Fed confirms a date for the rate hike,” said Danny Wong Teck Meng, chief executive officer of Kuala Lumpur-based Areca Capital Sdn., which manages about $224 million in assets. “We are switching to stocks that have been sold down.”

All 10 industry groups in the MSCI Emerging Markets Index fell on Monday, led by technology and energy companies. SapuraKencana Petroleum Bhd., Malaysia’s biggest oil and gas services provider, tumbled the most on record.