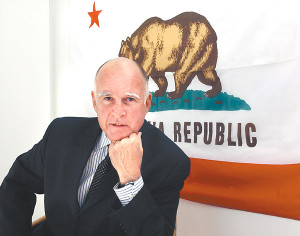 Governor Jerry Brown – Photo by Will Davison / The Signal

On Monday, California governor Jerry Brown announced a deal to raise the state minimum wage to $15 per hour by 2022. The deal marks the largest victory to date of the national fight for $15 an hour. USA TODAY

A deal to raise California’s minimum wage to $15 an hour by 2022 was reached Monday by Gov. Jerry Brown and state legislators, making the nation’s largest state the first to lift base earnings to that level and propelling a campaign to lift the pay floor nationally.

The increase will boost the wages of about 6.5 million California residents, or 43% of the state’s workforce, who earn less than $15, according to worker group Fight for $15. The proposal had been headed to a statewide referendum. It’s now expected to be approved by the state assembly.

“This plan raises the minimum wage in a careful and responsible way and provides some flexibility if economic and budgetary conditions change,” Brown said. The governor can temporarily suspend the hikes in the event of poor economic conditions or a large budget deficit.

About a dozen cities have approved bumps in their minimum wages to $15, including Los Angeles, San Francisco, Seattle and several other municipalities in California.

In New York, Gov. Andrew Cuomo has proposed a $15 pay floor for New York City starting in 2019 and across the state by 2021. A plan is already in place to hike wages for fast-food and state government workers in both New York City and the state.

The pact was also hailed by labor advocates. “This is a very, very significant increase and for the first time would begin to reverse years of falling pay at the bottom” of the income ladder, Sonn said

The California legislation follows a series of one-day strikes by low-wage and other fast food workers demanding a $15 wage over the past 3½ years, protests funded by the Service Employees International Union. The crusade was written off as quixotic when it began but NELP officials credited it with prodding lawmakers as well as companies such as Facebook, Google and Nationwide Insurance to set $15 as base pay.

A $15 wage has even become a centerpiece of the presidential campaign. The Democratic Party adopted a $15 minimum in its platform and Sen. Bernie Sanders supports it. Hillary Clinton has said she backs a $12 pay floor.

Proposals to increase the federal minimum wage from $7.25 an hour to about $10 have been blocked by Republicans in Congress. Republicans and other critics say the state-level increases will force some businesses to replace workers with technology and even shut down in the face of rising costs.