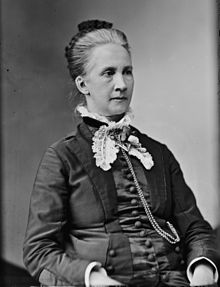 Belva Ann Bennett Lockwood becomes the first female attorney admitted to practice before the U.S. Supreme Court. In 1876, because of the Court’s refusal to admit women to practice before it “until such a change is required by statute,” Lockwood will undertake three years of Congressional lobbying, resulting in passage of H.R. 1077 “to relieve certain legal disabilities of women.”. A lawyer, author, and women’s rights activist, Lockwood will run for election as President of the United States in 1884 and 1888. 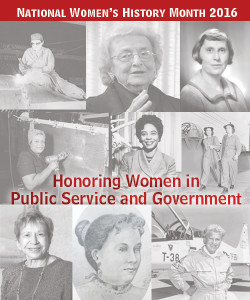 As we begin a month-long commemoration of National Women’s History Month, I’m glad that this year’s theme honors women in public service. It’s a perfect time for us to reflect on the accomplishments of women in government who succeeded, often against great odds. It’s also the right time to recommit ourselves to encouraging the next generation of women leaders

The National Women’s History Project has named 15 women who it says “have shaped America’s history and its future through their public service and government leadership.” Included in this accomplished group are four women who dedicated their lives to Federal service:

From young women in high school and college studying such critical skills as Science, Technology, Engineering, and Math (STEM) to women in mid-career, it’s important that government reach out, as part of its overall recruitment efforts, and encourage them to join in serving the American people. OPM is committed to helping agencies find and develop the talent to follow in the footsteps of the distinguished leaders we honor this month.

We are working with agencies to identify and remove any barriers that managers may face in recruiting the diverse talent they need, including women. Through OPM initiatives like Executive Women in Motion, we are bringing aspiring women leaders together with mentors who can help them and encourage them to become members of the Senior Executive Service.

OPM issues guidance to agencies to help promote the policies that help women – and men – balance the needs of their families and the responsibilities of their jobs. This includes such workplace flexibilities as telework and alternative work schedules.

OPM also provides data on the continued narrowing of the pay gap in the Federal workforce. In 1992, Federal women in white-collar jobs made 70-cents on the dollar compared to men. The most recent data we have show that by 2012 that number was 87 cents. Women in Federal leadership positions are doing even better. In 2012, these women were paid 99.2 cents on the dollar compared to their male counterparts.

Working with the Department of Justice, OPM is also helping agencies develop strategies and training to increase awareness of and help colleagues support victims of Domestic Violence, Sexual Abuse, and Stalking.

As the President said in his proclamation recognizing March as Women’s History Month, “We have come far, but there is still far to go in shattering the glass ceiling that holds women back. This month, as we reflect on the marks made by women throughout history, let us uphold the responsibility that falls on all of us — regardless of gender — and fight for equal opportunity for our daughters as well as our sons.”

OPM, like other agencies across government, will set aside time this month to celebrate the achievements of women in Federal service. I want to thank all Federal employees for the work they do every day to fulfill their missions to serve the American people.