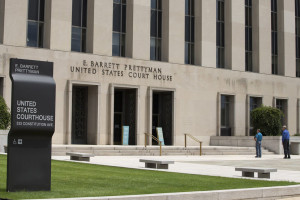 A view of the E. Barrett Prettyman Federal Courthouse that houses the U.S. Court of Appeals for the D.C. Circuit. (AP Photo/ Evan Vucci)

In Martin v. Hunter’s Lessee, the U.S. Supreme Court declares that its appellate power over federal legal issues extends to cases in state courts, a notion that the Court states is supported by the “letter and spirit of the Constitution.” The decision was handed down after the Virginia Court of Appeals defied a U.S. Supreme Court order in a case dealing with the impact of a federal treaty on a property dispute, giving the high court the opportunity to rule on the constitutionality of its review powers.