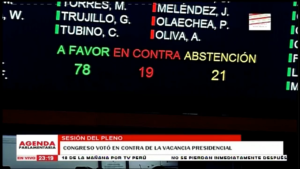 LIMA, Peru — President Pedro Pablo Kuczynski survived a bid by Congress on Thursday to remove him from office over allegations linking him to a graft scandal that has rattled Latin America, as lawmakers fell short of the necessary two-thirds majority after 12 hours of impassioned debate.

Mr. Kuczynski, who took office in July 2016, delivered an emotional plea to Congress earlier in the day, calling the claims against him “weak” and saying the impeachment proceedings were being used for political gain.

“Congress members, do not join this strategy, do not let yourselves become confused,” Mr. Kuczynski, 79, said. “Those who accuse me will not let their condemnation be subjected to corroboration, to a debate, to due process.”

His detractors called the president “permanently morally unfit” to lead the country, arguing that he committed perjury in a congressional inquiry by stating that he had no professional ties to the Brazilian construction giant Odebrecht. It was later revealed that a financial services company he owned had received $782,000 from Odebrecht, which is now at the center of the graft scandal.

Guido Lombardi, who was among the president’s defenders in Congress, called the proceedings “rushed” and said lawmakers had manufactured a political crisis. But his critics zeroed in on Mr. Kuczynski’s statements during the congressional inquiry. “The problem of lying is not only the lack of ethics of lying,” Victor Andrés Belaúnde said, “but the cover-up of improper acts that have enriched him.”

The president eventually acknowledged that his firm, the Miami-based Westfield Capital, had received money from Odebrecht, but he said that the transaction did not violate laws and that it was not a bribe for preferential treatment. His company was being run by a business partner at the time, and Mr. Kuczynski said the firm had provided only consulting services to Odebrecht.

Mr. Kuczynski said that at the time he was testifying in the inquiry, he was unaware that Odebrecht had done business with his company between 2004 and 2007. Last year, Odebrecht admitted to paying roughly $800 million in payoffs in exchange for lucrative projects, setting off a series of investigations by prosecutors and lawmakers, principally in Latin America, to reveal who was on the receiving end of the payments.