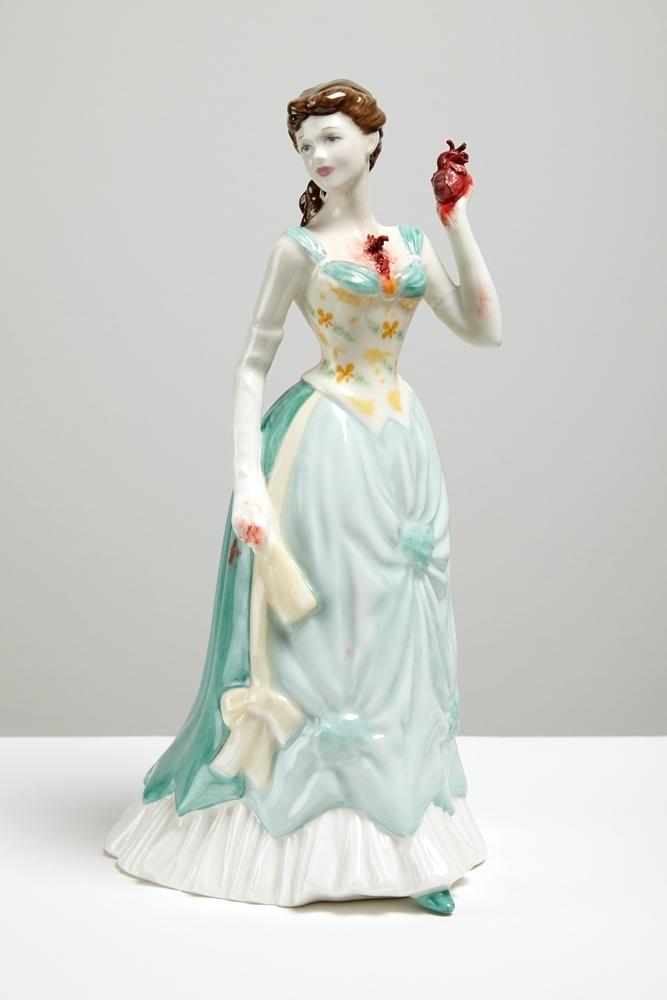 British artist Jessica Harrison tackles and unpacks assumptions about the female body with her cleverly embellished figurines. The found ceramics are selected for their silly poses, onto which Harrison adds her own flourishes: an anatomical overhaul spiked with tongue-in-cheek humor. As Harrison puts it, “the re-worked ceramic makes the figure a participant in their own undoing.” 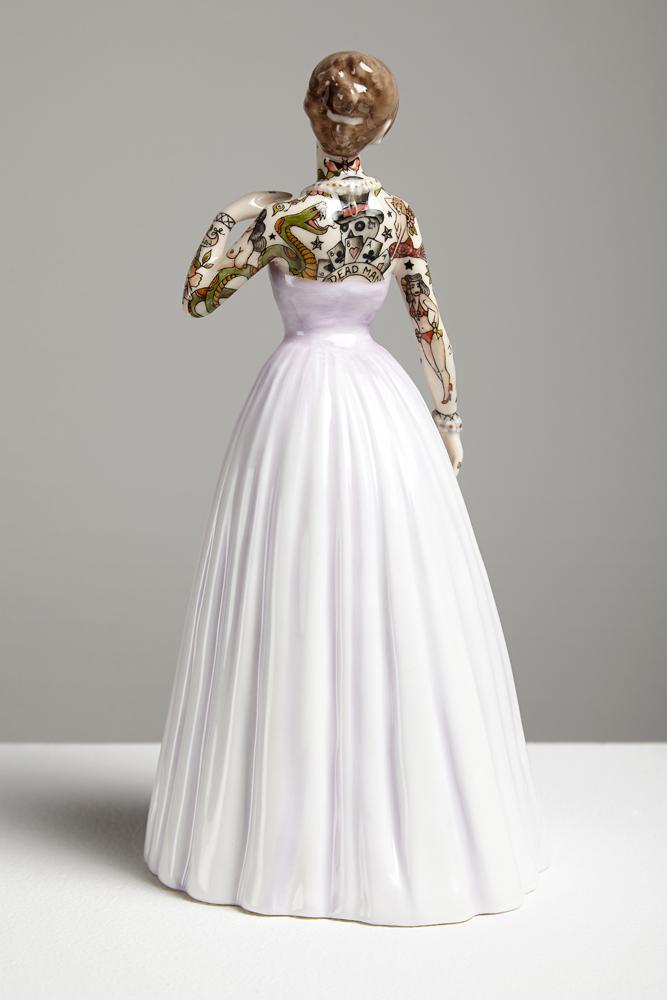 Deploying a wide variety of materials in her artistic practice, from paint to textiles to digital collage, she regularly explores the intricacies of the sensory body. She’s made silk scarves with muscle patterns and roughly articulated clay pin-ups. Examples of Harrison’s work are currently on view in the group show Ceramix, at La Maison Rouge in Paris, which explores experimental ceramics by a range of artists from throughout the 20th and 21st centuries. We caught up with the artist to discuss feminism, creativity, and undercutting art history’s gender bias. 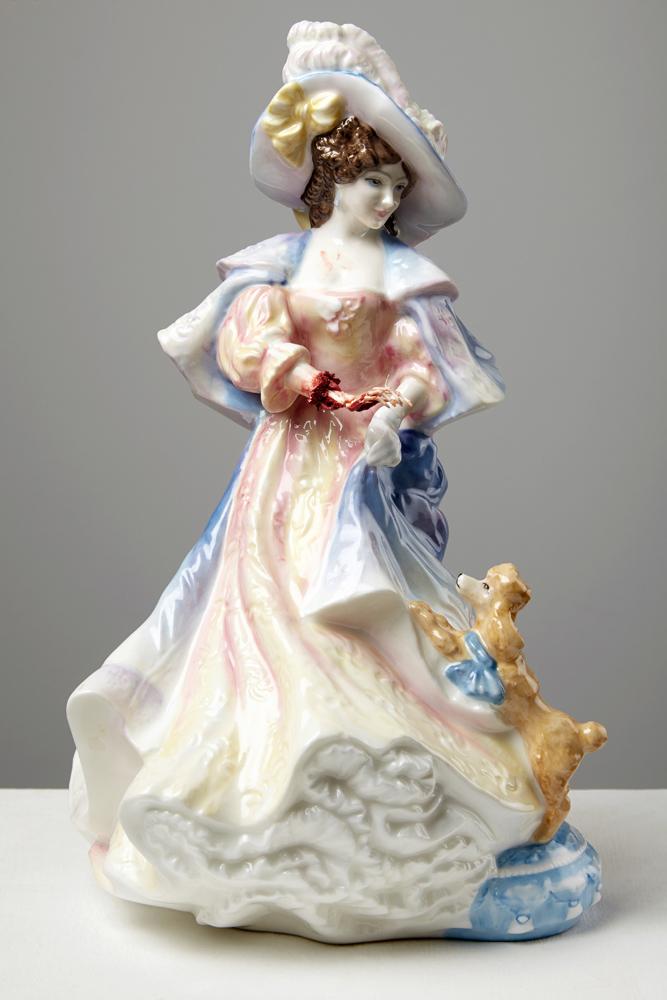 Your pieces in the Ceramix exhibition are shown under the sub-heading “Sacred and Profane: Revisited Traditions.” How does that title relate to your work?
I guess my work in the exhibition slots in quite well with that summary, given that I’m appropriating or re-thinking ornamental items that were acquired with the intention of showing off a particular taste within the home. Simplistically, you could say that traditional pieces are trying to appeal to some kind of “good taste” middle-class Englishness. They kind of have this weird pointlessness to them — their poses, their expressions — the figures are just in some kind of bizarre moment of blissful, bland nothingness. With the Broken figures, I am trying to activate their poses, give them some meaning; and in Painted Ladies, the crudeness of the tattoo designs highlights the ridiculous outfits these poor ladies are forever subjected to.

What prompted the Broken series of decapitated, scalped, and otherwise “injured” ladies?
I had an interest in working with the figure, but I didn’t want to make something figurative — I was trying to move away from overly defined outlines of the body. The series was a playful, cathartic way to try to re-work the figure. With these pieces, I reference that kind of anatomical enlightenment era, when the body was being explored from the skin down to the bone, and everything in-between. However advanced our explorations of the body have become since, this interior anatomical space is still gender-biased — a classically and continually male space. The female body is only typically used when illustrating a specifically “female part” of the body: the reproductive organs. The female interior space is still laced with taboo in a way that the male interior is not. I know this is still the case because I’ve received criticism for reworking female figurines — that it is somehow more “violent” than reworking male figurines. 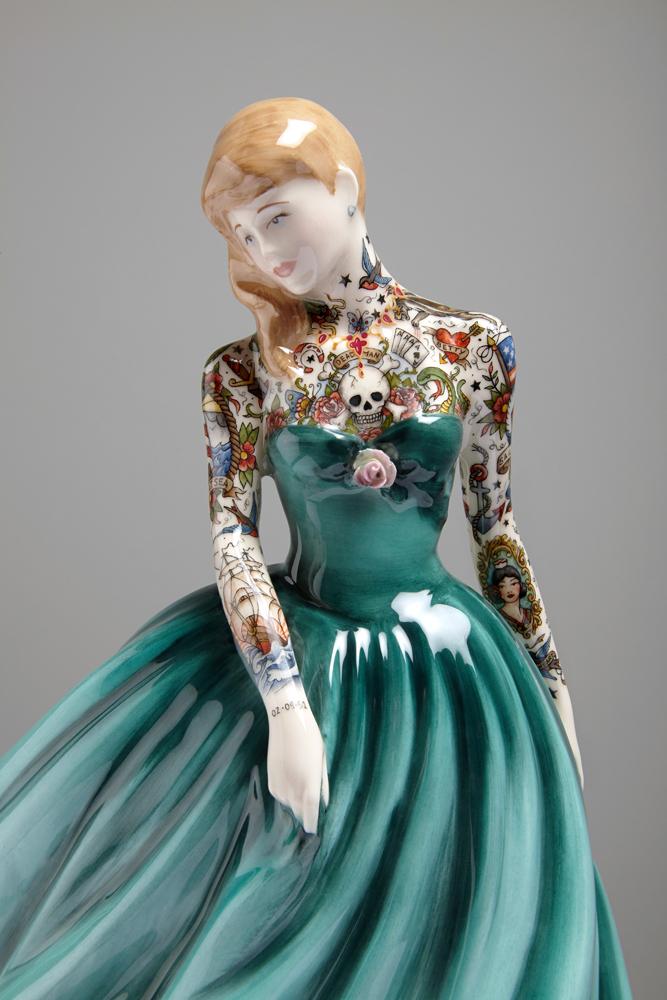 You don’t consider the pieces violent?
I don’t. Each figurine has been carefully chosen based on their existing pose, where the re-worked ceramic makes the figure a participant in their own undoing. I like to think that these passive ladies have been given a more active role, more in line with how the male body is depicted, in both anatomical history and art history. I do consider them to be quite humorous though, and this is usually the reaction that they get, from children right up to older audiences (who more typically might have owned these kind of figurines originally). 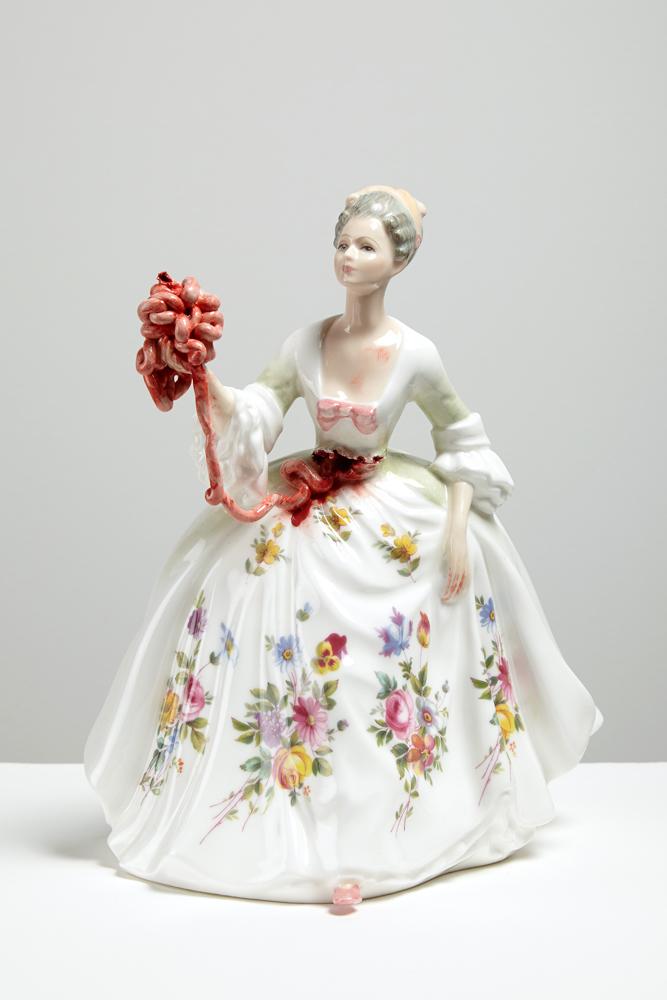 Do you see these two series as feminist? What role does feminism play in your work?
I am a feminist and feminist issues are important in my life, work, ideas, and how I go about my everyday business. Having said that, I don’t consider “feminism” to play an active or overt role in my work, but the continuing issues facing women and young girls today is of course something that is always going to be threaded into my work when dealing with figurative pieces or the subject of the body. 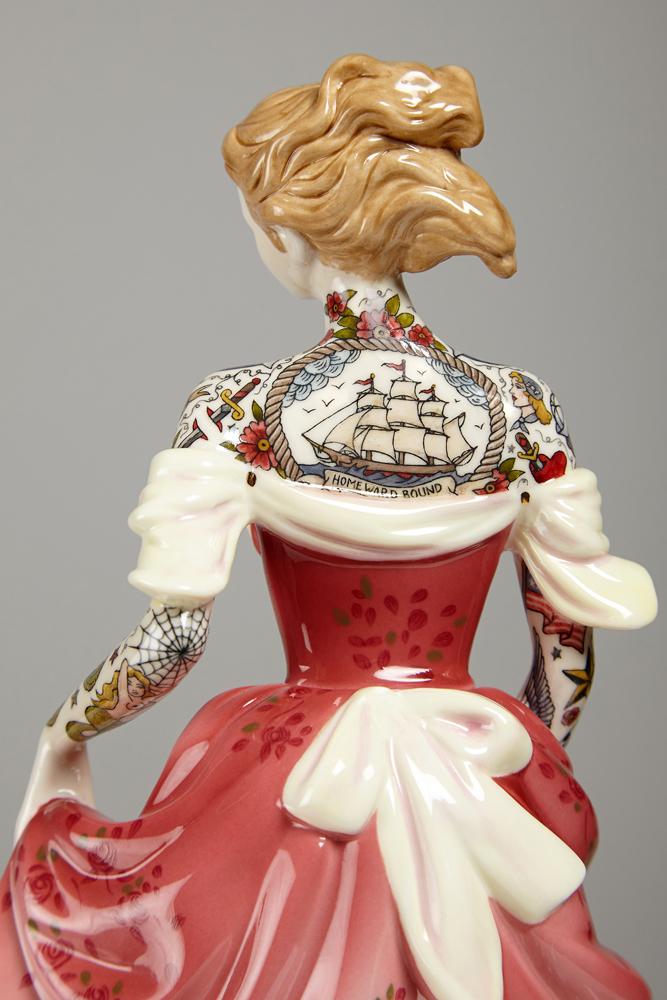 Can you talk about your use of “found ceramics”? How does that influence your practice?
I started working with found ceramics because I didn’t know how to make ceramics from scratch — I decided to work backwards and get to know clay back to front. The Broken and Painted Ladies series, made using mass-produced figurines, could in theory continue forever. A part of me would like to keep going, to re-work all of the figurines that exist in the world, but there are too many other projects out there for me to be working on.

‘Ceramix’ is on view at La Maison Rouge and Cité de la Céramique in Paris through June 5, 2016.
jessicaharrison.co.uk 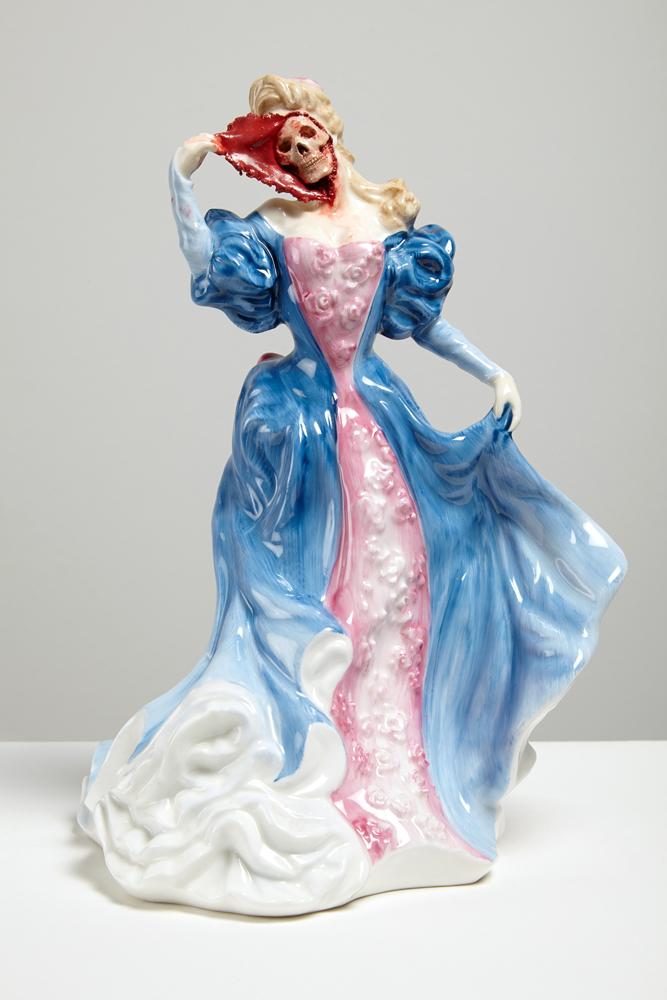