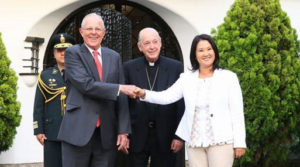 Lima, Dec. 27 (IANS): The repercussions of Peruvian President Pedro Pablo Kuczynski’s Christmas Eve pardon for disgraced former head of state Alberto Fujimori continued to be felt as allies distanced themselves from the incumbent, and human rights organisations explored ways to send Fujimori back to prison.

Roger Rodriguez, the head of the human rights division of the Justice Ministry, along with two members of Peru’s High-Level Commission on Peace, Reparation and Reconciliation, Daniel Sanchez and Katherine Valenzuela, announced their resignation on Tuesday, Efe news reported.

Their resignation letters were published in Lima daily La Republica.

Fujimori “did not qualify for the granting of a humanitarian pardon”, Rodriguez wrote, while Sanchez said he would find it “shameful” to represent the government in discussions with victims of Fujimori, who was sentenced to 25 years behind bars for massacres and other crimes committed during his 1990-2000 tenure.

Lawmaker Alberto de Belaunde also resigned from Kuczynski’s PPK party and two other members, Vicente Zeballos and Gino Costa, are expected to follow suit in the coming days amid continuing street protests over the pardon.

On another front, the human rights organisation Aprodeh asked the Inter-American Court of Human Rights to order the Peruvian government to provide information on the pardon and to hold a public hearing on the matter.

Kuczynski signed the pardon just three days after he avoided impeachment due to the votes of 10 opposition lawmakers led by Fujimori’s son Kenji, prompting many to suspect that political machinations were at work in the decision.

Kuczynski became President by defeating Keiko Fujimori — Kenji’s older sister — in a 2016 runoff. During the campaign, he vowed not to pardon Alberto Fujimori.

The Commission on Presidential Clemency concluded that Fujimori was suffering from a “progressive, degenerative and incurable disease” likely to be aggravated by the conditions in prison.

But according to legislator Indira Huilca, Fujimori enjoyed comfortable conditions in prison.