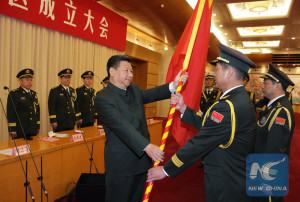 Xi, also chairman of the Central Military Commission (CMC), presented the flags to top officers of the five theater commands at a ceremony in Beijing.

Xi called on the theater commands to keep their duties in mind and resolutely implement the country’s military strategies.

The principle of a newly implemented structure, in which the CMC takes charge of the overall military administration, theatre commands focus on combat and the different military branches pursue their own development, must be resolutely observed, Xi said.

He further required building a joint battle command system that is “absolutely loyal, resourceful in fighting, efficient in commanding and courageous and capable of winning wars.”

Xi said the move to establish the theater commands and form the joint battle command system is a strategic decision by the Communist Party of China (CPC) Central Committee and the CMC to realize the Chinese dream of a strong military. It is also a landmark progress in implementing the military reforms and building the PLA’s joint battle system.

He said the five theater commands are responsible for dealing with security threats in their respective strategic scopes, maintaining peace, containing wars and winning wars, noting their pivotal role in safeguarding the country’s overall national security and military strategies.

The theater commands are directed to unswervingly act under the command of the Party and firmly uphold the CPC’s absolute leadership over the armed forces, Xi said, urging the troops to strengthen political awareness and the awareness of safeguarding general interests.

“The armed forces should maintain a high degree of conformity with the CPC Central Committee and the CMC, strictly obey political discipline and rules, and carry out their orders and instructions to the letter,” he added.

The newly-established commands should concentrate on fighting battles, Xi said, asking them to study the mechanism of winning modern wars, grasp the law of employing military forces, speed up the development of a strategy for the theater commands and enhance the training of joint operations and command in order to win the initiative in future wars.

Xi urged the theater commands to improve their ability to command and strengthen joint command and action to complete the tasks of routine combat readiness and military actions.

The commands should be prepared to fight at any time and always be ready to act in response to the call of the people and the Party, Xi noted.

On behalf of their respective theater commands, the political commissars of the five theater commands vowed to firmly listen to the command of the CPC Central Committee, the CMC and Xi, and to perform their missions mandated by the party and the people.

China’s military reform is aimed at establishing a three-tier “the CMC – theater commands – troops” command system and an administration system that goes from the CMC through various services to the troops. 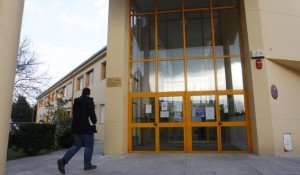