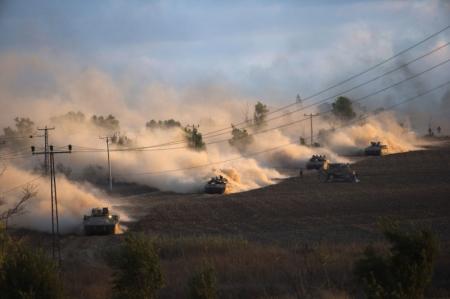 No matter how and when the conflict between Hamas and Israel ends, two things are certain. The first is that Israel will be able to claim a tactical victory. The second is that it will have suffered a strategic defeat.

At the tactical level, the success of the Iron Dome missile defense system has kept Israeli casualties near zero and significantly reduced the material damage from the rockets fired from Gaza. Israel’s ground invasion, launched on Thursday, will also reap rewards. Indeed, it already has: Israeli forces have exposed and destroyed several Hamas tunnels, including some that were intended to allow cross-border activity into Israel and others that facilitated the movement of goods, ammunition, and militants within Gaza itself.

Such tactical achievements should not be minimized. But they do not equal a strategic victory. War, as Clausewitz famously taught, is the continuation of politics by other means. Wars are fought to realign politics in a way that benefits the victor and is detrimental to the loser. But the Israelis have lost sight of this distinction.

In fact, Israel has a history of claiming victory when in fact it has suffered defeat; the October 1973 war is the best example. Israel claimed that it had won because its forces ended their war on the western side of the Suez Canal with Egyptian forces partially encircled behind them. The reality is that Egypt achieved the strategic victory. All along, Egyptian President Anwar al-Sadat’s objective was to seize and hold some territory in order to dislodge stuck political negotiations and, ultimately, recover the occupied Sinai Peninsula for Egypt. Sadat got what he wanted.

Israelis might believe that, even though they are not likely to see a political realignment at the end of this war, at least Hamas won’t have achieved its own strategic objectives. The absence of large numbers of Israeli fatalities, the thinking goes, is a mark of Hamas’ failure. But Israelis are wrong there, too. Killing large numbers of Israelis would be a treat for Hamas, but it is not vital to the group’s definition of strategic success.

Hamas’ strategic objective is to shatter Israel’s sense of normalcy. It is only possible for Israel to exist as a flourishing and prosperous democracy under the garrisoned conditions of persistent conflict when its citizens are able to maintain the illusion that their lives are more or less similar to what they would aspire to have in London, Paris, or New York. With that illusion destroyed, several outcomes are possible, none of which are good for Israel. Despairing of the possibility of peace, small numbers of Israeli Jews may decide to emigrate. More likely is that disagreements over how to handle the Palestinian problem will deepen, sowing discord within Israeli society and undermining the core Israeli narrative based on the justice of Zionism. Cohesion around that narrative has been a key motivating force for making the sacrifices and facing the dangers that life in Israel often entails, including the long, compulsory military service that is a fact of life for most Israeli Jews. Although these internal fissures will not bring Israel to its knees, any erosion of Israeli power — including the power of the population’s will — is a win for Hamas.

Israel has long been eager to thwart the expansion of the influence of Islamist resistance organizations that they see as determinedly more implacable foes. Consider that the first Intifada, from 1987­ to 1993, led to the weakening of the secular Palestinian Liberation Organization (PLO) and to the rise of dangerous and militant organizations such as Hamas and the Palestinian Islamic Jihad. The threat of these Islamist organizations motivated Israeli leaders Yitzhak Rabin and Shimon Peres to bolster the failing fortunes of PLO leader Yasir Arafat and embark on the Oslo peace process, which, had it succeeded, would have been a dead end for Hamas.

Indeed it was the violence of the second Intifada, which destroyed nearly 1,000 Israeli lives between 2001 and 2004 through wave upon wave of suicide attacks in the heart of Israel’s major cities, which caused Israeli citizens’ confidence to buckle and ultimately persuaded them to support a unilateral withdrawal of citizens and settlements from Gaza. They hoped the move would appease Palestinian wrath. It did not.

The persistent, low level rocketing of Israel’s southern cities since Israel withdrew from Gaza has not caused enough disruption in the rest of Israel to bring Hamas any strategic benefits. In other words, Hamas’ attacks on the border cities have not stopped most Israelis from going about their daily business in near-total obliviousness to the political and humanitarian condition of the Palestinians in Gaza.

This new round of violence, on the other hand, has caused enormous disruption. Rockets fired from Gaza have triggered warning sirens in Tel Aviv, Jerusalem, Haifa, Beer Sheva — all of Israel’s major cities — and points in between as well. Those rockets haven’t killed any people thus far, but they have sent almost everyone scrambling for shelter several times a day and shattered the illusion that what happens “there” does not affect life “here.”

That would be enough for Hamas to declare victory. But the group has been racking up additional strategic benefits as well. First, the disproportionate number of casualties in Israel and Gaza has made Israel appear, at least to many Western eyes, as the aggressor, even though Hamas shot first this time around. Second, the Iron Dome has made covering the story within Israel boring for outside journalists. “Rocket goes off, rocket gets intercepted, life goes on” is not an exciting story. Israel’s retaliations, which level Gaza’s unreinforced buildings and leave behind mangled bodies, sell more newspapers. And so, the world has focused on Gaza. Israel’s friends may bemoan that as unfair — Israel is being punished for successfully defending its citizens, while Hamas leaves its own vulnerable. But that misses the point. War is not an exercise in fairness, but in the attainment of strategic objectives.

And, on that score, Hamas has already won. It has shattered the necessary illusion for Israelis that a political stalemate with the Palestinians is cost-free for Israel. It has shown Israelis that, even if the Palestinians cannot kill them, they can extract a heavy psychological price. It has also raised the profile of the Palestinian cause and reinforced the perception that the Palestinians are weak victims standing against a powerful aggressor. Down the road, that feeling is sure to be translated into pressure on Israel, perhaps by politicians and certainly by social movements whose objective is to isolate Israel politically and damage it through economic boycotts.

There are still those who will fantasize that this defeat will come with the same silver lining as Israel’s loss in 1973. Although Sadat’s attacks on Israelis in the Sinai shattered the feeling of invincibility that Israelis had nurtured since the end of the 1967 war, the war at least resulted in the Camp David accords and a durable, if cold, peace that has underwritten Israel’s regional security since the late 1970s. Perhaps Hamas’ strategic victory in this conflict will yield similar dividends for Israel down the road. However, such an outcome seems quite unlikely. Sadat had concrete objectives, namely the re-opening of the Suez Canal and the return of the Sinai Peninsula to Egypt — objectives that were reconcilable with Israel’s own needs. Hamas, on the other hand, calls for Israel’s elimination, an objective that leaves scant room for negotiation.

In the end, this round will go to the Palestinians, as did the previous major round of fighting in 2008. Focusing on tactical success should not blind Israel to the dangers it faces from these repeated strategic defeats. There is not much that Israel can do to change Hamas’ behavior. What it must do, however, to prevent Hamas from capitalizing on its strategic success is to remind contemporary Israelis of what their early leaders knew all too well. As Moshe Dayan, an Israeli army chief of staff and later defense minister, said, ‘‘We know that in order for their [the Arab] hope of annihilating us to die away, it is incumbent on us — morning and night — to be armed and ready.” The challenge for Israel is to maintain that state of readiness while at the same time making the humane and appropriate choices that ensure its security, enhance Israel’s attractiveness as a strategic and commercial partner for Western nations, and maintain its internal social cohesion over the long haul. This trifecta may seem impossible, but the first 19 years of Israel’s national existence suggest otherwise.