This music was recommended by Julie D. Thank you! 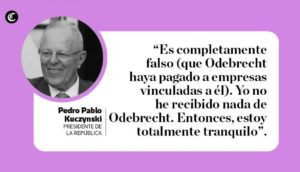 The author claims relating Kuczynski ‘s opinion: “I never received any contribution from Odebrecht for my 2011 and 2016 election campaigns. Nor have I had professional links with Odebrecht”. He also states that the president said via Twitter. “I’m absolutely sure of my acts. Let’s leave our prosecution and judicial authorities to work with autonomy independence and free from political pressures.”