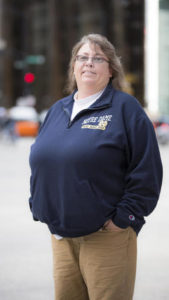 A federal appeals court in Chicago has ruled the 1964 Civil Rights Act does protect LGBT employees from workplace discrimination. The case stems from a lawsuit by Indiana teacher Kimberly Hively, pictured, alleging that a community college didn’t hire her full time because she is a lesbian. Image: http://www.trbimg.com/img-58e425d4/turbine/ct-law-covers-lgbt-workplace-bias-20170404-002/450/253×450

A federal court in Chicago on Tuesday became the first U.S. appellate court in the nation to rule that LGBT employees are protected from workplace discrimination under the 1964 Civil Rights Act.

The decision by the 7th U.S. Circuit Court of Appeals sends the case involving Kim Hively, a former Indiana community college teacher who claims she was denied promotions and let go from her job because she is a lesbian, back to a federal district court in Indiana.

“It’s really good to know that it’s making some headway,” said Hively, who now works as a high school math teacher in Indiana. “I always thought there was a big disconnect when they legalized gay marriage but didn’t extend any protections against workplace or housing discrimination. What they’re doing is allowing people to lose jobs and homes just because they fell in love.”

“Viewed through the lens of the gender non-conformity line of cases, Hively represents the ultimate case of failure to conform to the female stereotype,” chief judge Diane P. Wood wrote for the majority. “Hively’s claim is no different from the claims brought by women who were rejected for jobs in traditionally male workplaces, such as fire departments, construction, and policing.”

The ruling comes just three weeks after a three-judge panel in Atlanta ruled that employers aren’t prohibited from discriminating against employees based on sexual orientation.

The Hively case stems from an incident in 2009, when someone reported seeing the adjunct teacher at Ivy Tech Community College of Indiana in South Bend kiss her girlfriend goodbye in a car in the campus parking lot. The next day, Hively said, an administrator reprimanded her for “sucking face” and chastised her unprofessional behavior.

In the following five years, Hively was not granted full-time status despite multiple applications and was let go in 2014. She sued the community college herself in 2013, claiming she was “blocked from fulltime employment without just cause,” specifically her sexual preference.

Hively was represented by lawyers with LGBT advocacy group Lambda Legal in her appeals. Gregory Nevins, Lambda’s counsel and employment fairness project director, who has argued prejudice against gender and sexual orientation are the same thing, called Tuesday’s ruling a “game changer” for the LGBT community.

“Now that we see this in the right light, I think we’ll see a domino effect (court by court),” Nevins said. “All of those cases ruled in the last 15 or 30 years, that’s a moot point. It’s a new day.”

Tuesday’s ruling creates a precedent for lower courts in Illinois, Indiana and Wisconsin to follow. Hively’s case, Nevins said, will return to the U.S. District Court in the Northern District of Indiana, which previously had sided with Ivy Tech and dismissed Hively’s case with prejudice.

“It means Kim Hively will have her day in court,” Nevins said. “It’s a process that takes time. You want protections right away, but this will go a long way in courts across the country. It’s only a matter of time our courts see the light too.”

Saying that the college will not seek Supreme Court review, Ivy Tech spokesman Jeff Fanter said the college “denies that it discriminated against the plaintiff on the basis of her sex or sexual orientation and will defend the plaintiff’s claims on the merits in the trial court.”

The entire federal appeals court reheard oral arguments on the case in November. The focus of the discussion was on the meaning of the word “sex” in Title VII of the Civil Rights Act, the provision that bans workplace bias based on race, religion, national origin or sex.

Judges directed the toughest questions at John Maley, a lawyer for Ivy Tech, who argued only Congress could extend the protections in the act. Multiple court rulings back Maley’s contention that Congress meant for the word to refer only to whether a worker was male or female. Given that, he said it would be wrong to stretch the meaning of “sex” in the statute to also include sexual orientation. He conceded the law is imprecise, but added: “That makes it an issue for Congress.”

But aggressive questions from the federal judges suggested the court might be willing to expand the 53-year-old landmark law.

Judge Richard Posner asked Maley: “Who will be hurt if gays and lesbians have a little more job protection?” When Maley said he couldn’t think of anyone who would be harmed, Posner shot back, “So, what’s the big deal?” Posner also said it was wrong to say a decades-old statute is “frozen” on the day it passed and that courts can never broaden its scope.

Nevins’ argument that “sex” and “sexual orientation” discrimination were synonymous was rejected by the three dissenting judges, including Judge Diane S. Sykes, who wrote in her dissent that the 1964 federal statue was quite literal.

“Title VII does not define discrimination ‘because of sex,'” Sykes said. “In common, ordinary usage in 1964 — and now, for that matter — the word ‘sex’ means biologically male or female; it does not also refer to sexual orientation.”

Sykes prefaced her dissent by writing, “Any case heard by the full court is important. This one is momentous.”

The ruling comes as President Donald Trump’s administration has begun setting its own policies on LGBT rights. In late January, the White House said an Obama administration order barring companies that do federal work from workplace discrimination on the basis of sexual identity would no longer be enforced. In February, it revoked guidance on transgender students’ use of public school bathrooms, deferring to states.

The opposite situation in Missouri: Missouri Senate Votes Down LGBT Discrimination Protections 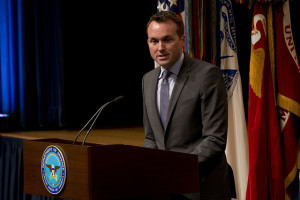 Just four years after the repeal of the military’s “don’t ask, don’t tell” policy, the Pentagon reached another milestone in its campaign to better integrate gay, lesbian, and transgender personnel into its ranks with the nomination of Eric Fanning, an openly gay official, to the Army’s top civilian post.

If confirmed to be the next secretary of the Army, Fanning he would become the first openly gay civilian to head a branch of the U.S. armed forces.

“Eric brings many years of proven experience and exceptional leadership to this new role,” Obama said in an announcement Friday.

Fanning has also been active in the LGBT movement, serving on the board of directors of the Gay & Lesbian Victory Fund from 2004 to 2007. In a May 2013 interview with the Washington Blade, Fanning said that during his first stint working for the Navy in 2009, before “don’t ask, don’t tell” was repealed, “it was very difficult when we were getting to the end of the first two years [of the Obama administration] and it wasn’t clear if we were going to be able to repeal ‘don’t ask, don’t tell.’ I didn’t know what I was going to do if we didn’t get the repeal through, because some people couldn’t work because they were openly gay or lesbian.”

In August, Patrick Murphy, an Iraq War vet and a Democrat who served in Congress as a representative from Pennsylvania from 2007 to 2011, was nominated to serve as undersecretary of the Army. In 2010, Murphy was instrumental in introducing the bill that would overturn the “don’t ask, don’t tell” law.

If confirmed, the two would make up a new leadership team at the top of the Army, along with Chief of Staff Gen. Mark Milley, who began his post in August.