What has Russia got invested in Syria?

Military aid, diplomatic support and an ever-increasing presence in Syria by Russia has made politicians around the world suspicious of what the Kremlin in Moscow has up its sleeve.

CNBC takes a look at the reasons why Russia is so keen to get involved in a conflict 2,000 kilometers away.

The terrorist group has taken over swathes of Iraq and Syria in a bid to entrench its self-proclaimed caliphate. As a result, Syria has descended into a civil war with Assad’s troops and other rebel groups vying to regain, or just gain, territorial control from the group.

“We support the government of Syria in its effort to counter terrorist aggression,” Putin said Tuesday at a security summit in Tajikstan.

The Kremlin’s increasing presence in Syria is raising eyebrows in the U.S, however, which believes it to be part of a geo-political strategy to help Russia gain a lasting and convenient military presence in the Middle East.

Although U.S. officials are skeptical about Russia’s intervention in Syria, Islamic State does pose a threat to Russia, one analyst told CNBC, particularly in the southern Russian republic of Chechnya, where Islam is a major religion and anti-Russian sentiment from pro- independence citizens is high.

“IS’ threat to Russia is not a speculation, it is a fact,” Lilit Gevorgyan, Russia & CIS Senior Economist at IHS, said Wednesday.

“IS has been using Russia’s troubled North Caucasus as fertile recruitment ground, and worse in June this year it even declared to have created a province in North Caucasus. This forms the basis of security reasons of Russia’s involvement in Syria.

But is it just to support Assad?

Putin has long been a staunch defender of Assad, despite continuing and credible claims that the Syrian president has used chemical weapons against his own people.

The west is no friend of Assad but, awkwardly, it is aligned with him in fighting Islamic State. But despite the common enemy, U.S. Secretary of State John Kerry earlier this week warned his Russia counterpart, Sergei Lavrov, that Moscow’s continued support for Assad “risks exacerbating and extending the conflict,” a statement of the conversation said.

Assad “could never be a credible member (of a coalition fighting ISIL),”Kerry said, adding that “there is no military solution to the overall conflict in Syria, which can only be resolved by a political transition away from Assad.”

Some analysts believe Russia only wants to prop up the Assad regime, rather than help defeat IS.

Torbjorn Soltvedt, Principal Analyst, Middle East and North Africa at Verisk Maplecroft said in a note Tuesday that despite the rhetoric against Islamic State, “concrete measures taken by Russia have nonetheless focused on ensuring the survival of the Syrian regime.”

“So far there is little to suggest that Russia is playing an important role in anti-Islamic State operations. The imminent delivery of a Russian-operated SA-22 anti-aircraft missile system to bolster the country’s air defences, for instance, will be of no utility against the Islamic State,” Soltvedt added.

On Tuesday, Putin said his government would continue to send military assistance to Syria and its cosy relationship with the regime appears to be allowing it to establish a useful military base and presence in the Middle East. The country already has a naval base in the coastal city of Tartus, which gives it access to the Mediterranean sea.

At the start of the week, a Pentagon spokesman said that a steady flow of people and equipment near the north-western city of Latakia suggested Moscow was planning to establish a “forward air operating base” at an airport there.

On the investment side, Russia has some commercial exposure and has been exploring energy development projects in the country in the past “but Syria has never been a critical trading partner for Russia,” Gevorgyan told CNBC.

It has got stalled deals with Russia over gas and oil exploration, however. In July, Gissa Guchetl, the executive director of the Russian Union of Gas and Oil Industrialists, told state news agency RIA Novosti that Russian business would consider resuming energy contracts in Syria worth $1.6 billion if the country manages to stabilize from its civil war.

While Russia might appear (or want to appear) as a helping hand for the alliance against Islamic State, experts believe that the Syrian conflict is a useful diversion for Russia from a crisis closer to home with Ukraine.

One analyst said Putin’s “support” for Assad was purely strategic.

“It’s now becoming obvious that Russia has lost Ukraine, thus, the stakes are high to ensure that Assad restores full control of Syria preventing the country coming under the American influence.”

Since Russia’s perceived role in assisting a pro-Russian uprising in east Ukraine in March 2014, it has been put under international sanctions. Wading into Syria then could help distract both the domestic population from biting sanctions and global attention from its behavior over Ukraine.

Appearing to help in Syria could also possibly thaw frosty relations with the rest of the world, IHS’ Gevorgyan said. “Ukraine is unlikely to go away as a battleground of West- Russia economic and strategic interests anytime soon. However, enter Syria and the Western attention is somewhat diverted from Ukraine.”

“In the best case scenario, Russia would like to see an anti-IS fight in Syria together with the West serving as a turning point for its exceptionally poor relations with Washington and Brussels now,” she added. 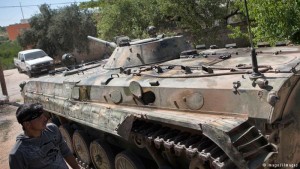