If Trump’s FCC Repeals Net Neutrality, Elites Will Rule the Internet—and the Future 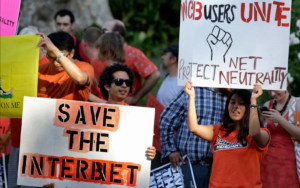 Net neutrality is the First Amendment of the Internet. It guarantees that speech is equal on the network of networks—whether the words come from Walmart, the corporate behemoth that identifies as the largest retailer in the world, or Walmart Watch, the movement that “seeks to hold Walmart fully accountable for its impact on communities, America’s workforce, the retail sector, the environment and the economy.”

Net-neutrality protections assure that the essential democratic discourse on the World Wide Web cannot be bartered off to the highest bidders of a billionaire class that dominates the political debate on so many other media platforms.

The media monopolists of the telecommunications industry hate net neutrality. They have worked for years to overturn guarantees of an open Internet because those guarantees get in their way of their profiteering. If net neutrality is eliminated, they will restructure how the Internet works, creating information superhighways for corporate and political elites and digital dirt roads for those who cannot afford the corporate tolls.

No one will be surprised to learn which side Donald Trump’s FCC has chosen.

FCC chair Ajit Pai, who does the bidding of the telecommunications conglomerates with the rigid determination and focus of the former Verizon lawyer that he is, has been racing to eliminate net neutrality. Pai plans to have the FCC vote on December 14 to overturn the safeguards that were put in place during the Obama administration. If Pai and the Trump-aligned majority on the five-member commission succeed in gutting the existing Open Internet Order, they will alter the future of communications in America.

That alteration would “rig the internet,” according to Congressional Progressive Caucus co-chairs Mark Pocan of Wisconsin and Raúl Grijalva of Arizona, who say, “If [Pai] is successful, Chairman Pai will hand the keys to our open internet to major corporations to charge more for a tiered system where wealthy and powerful websites can pay to have their content delivered faster to consumers. This leaves smaller, independent websites with slower load times and consumers with obstructed access to the internet—a particularly harmful decision for communities of color, students, and online activists. This is an assault on the freedom of speech and therefore our democracy.”

According to former FCC commissioner Michael Copps, ending net neutrality will end the Internet as we know it.

“There can be no truly open internet without net neutrality,” says Copps. “To believe otherwise is to be captive to special interest power brokers or to an old and discredited ideology that thinks monopoly and not government oversight best serves the nation. In this case, I think it’s both. The FCC under Pai is handing over the internet to a few humongous gatekeepers who see the rest of us as products to be delivered to advertisers, not as citizens needing communications that serve democracy’s needs. By empowering ISPs to create fast lanes for the few and squelch alternative points of view, the Trump FCC fecklessly casts aside years of popular consensus that the public needs net neutrality. The tens of thousands of Americans I have talked with, both Republicans and Democrats, fully understand this need.”

Copps says: “This naked corporatism is Washington at its worst.”

It is not an exaggeration to suggest that the worst of the Trump agenda is on display in the attack on net neutrality. The stakes are that high.

More than just the future of the Internet is at stake. Because the Internet is such a defining force in our communications, our business arrangements and our politics, what Pai proposes—from the relative anonymity of the regulatory state—is a bartering off of the future that must be resisted in the present.

The nation’s media reform network, Free Press, says: “We have three weeks to save the Internet.”

Media and democracy groups saw this one coming. They’ve been organizing online campaigns for months. And they’re now organizing street protests in Boston, Denver, San Francisco, New York, Phoenix, and other cities nationwide. They’ll target the offices of corporations that have opposed net neutrality, such as Verizon. They’ll target the offices of members of Congress. They’ll march on the FCC. And they will prepare legal and legislative strategies to defend the Internet—and the future.

“This is the free speech fight of our generation and internet users are pissed off and paying attention,” says Evan Greer, campaign director for the group Fight for the Future, “Ajit Pai may be owned by Verizon, but he has to answer to Congress, and lawmakers have to answer to us, their constituents. The corrupt bureaucrats trying to kill net neutrality are hoping to avoid public backlash by burying the news over the [Thanksgiving] Holiday weekend. We’re taking our protest from the internet to the streets to make sure that doesn’t happen.”

John Nichols TWITTER John Nichols is The Nation’s national-affairs correspondent. He is the author of Horsemen of the Trumpocalypse: A Field Guide to the Most Dangerous People in America, from Nation Books, and co-author, with Robert W. McChesney, of People Get Ready: The Fight Against a Jobless Economy and a Citizenless Democracy.