Michelle Triola Marvin, whose landmark alimony-without-marriage lawsuit against the actor Lee Marvin, her former boyfriend, helped lead to the concept of “palimony” settlements for unmarried partners, died on Friday morning in Malibu at the home she shared with Dick Van Dyke. She was 76.

The cause was lung cancer, a spokesman, Bob Palmer, told The Associated Press.

Michelle Triola was a little-known actress and singer in 1964 when she began living with Mr. Marvin, the leading man whose role as a gunslinger in “Cat Ballou” earned him an Academy Award a year later. After the couple split in the early 70’s, Ms. Triola, who by that time had adopted Mr. Marvin’s last name, retained a lawyer and took Mr. Marvin to court, claiming that she deserved part of his $3.6 million fortune because their relationship had been based on an unwritten contract just as legitimate as a marriage certificate.

Her lawyer, Marvin M. Mitchelson, argued that Ms. Triola Marvin had an oral agreement with Mr. Marvin that she would give up her career and devote herself to him full time, “as a companion, homemaker, housekeeper and cook.” In return, Mr. Mitchelson argued, Mr. Marvin had agreed to provide all of Ms. Triola Marvin’s “financial support and needs for the rest of her life.”

In 1979, after a sensational three-month trial that featured Hollywood celebrities testifying in support of Mr. Marvin, a judge rejected Ms. Triola Marvin’s claim that the two shared any expressed or implicit contract. But in a small victory for her, the court ruled that she was entitled to $104,000 in “rehabilitative” alimony, or palimony, a portmanteau of “pal” and “alimony.”

The case broke ground, and the attention surrounding it prompted a flood of similar cases and brought Mr. Mitchelson a lucrative career as a divorce lawyer. The case established a precedent in California that allowed unmarried partners to sue for financial support, and courts in Connecticut, New Jersey and many other states soon followed suit.

Ms. Triola Marvin went on to work for a public relations firm, and began a relationship with Mr. Van Dyke, with whom she lived for 30 years. Besides Mr. Van Dyke, she is survived by a sister, Diane Triola Johnson of Los Angeles.

Her small victory in Marvin v. Marvin was short lived. In 1981, a California appeals court, in a 2-to-1 ruling, overturned the judgment. Ms. Triola Marvin later said in an interview on “Good Morning America” that she had not been surprised by the decision because the appeals panel was made up of two men and one woman.

“I understand that the woman tried very hard to reach the two men in her argument,” she said. 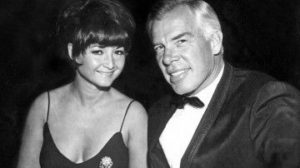