Priming the Pump: The Economic Metaphor Trump ‘Came Up With’

President Trump recently sat for a long interview with The Economist magazine in which he discussed his economic agenda. One exchange was particularly attention-grabbing for those who could remember their high school history, or who paid vague attention to the debates over stimulus during the last recession.

Explaining why he seeks tax cuts even if they risk expanding the budget deficit, President Trump said that they might increase the deficit temporarily, but that “we have to prime the pump.”

“Have you heard that expression before, for this particular type of an event?” the president said.

Yes, the interviewer — who, again, is an editor of The Economist — confirmed.

“Have you heard that expression used before? Because I haven’t heard it. I mean, I just … I came up with it a couple of days ago and I thought it was good.”

What is Mr. Trump talking about?

“Priming the pump” is a common metaphor for using government tax and spending to try to boost the economy into a higher level of functioning.

The origin of the metaphor refers to pumps used to extract water from wells, which were more widespread before most people had indoor plumbing. The basic idea was to pour a bit of water into a mechanism to make it possible to pump water out. Here’s a video!

The economics metaphor is that the government might increase economic growth by pumping a little extra cash into the system, perhaps by spending money on jobs programs, or, to use Mr. Trump’s preferred policy, cutting taxes. The hope is that the economy then takes off on its own, just as adding a little water to a pump enables water to flow freely.

Did he invent the term?

No. It dates to before Mr. Trump was born. It was in wide use by 1933, when President Roosevelt fought the Great Depression with pump-priming stimulus. For example, a 1933 cartoon assailing the Roosevelt administration’s spending practices was titled “What we need is another pump” and showed a desperate Roosevelt, with billions already spent, pouring more water into a pump, fruitlessly.

The term is most closely associated with the economic theories of John Maynard Keynes, who advocated energetic intervention to try to arrest the depression. By the time Mr. Trump was in school in the 1950s and 1960s, it was widely taught in history and economics courses as part of the story of how the United States emerged from the depression. 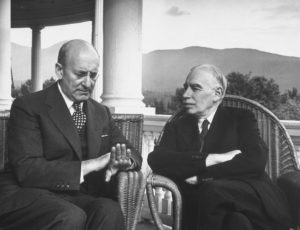 The concept was widely discussed again in 2009 and subsequent years in the context of the Obama administration’s stimulus package, which aimed to jolt the United States out of the deep recession. A Nexis search shows the phrase “pump priming” or its variants appeared in 1,073 news articles in major publications in 2009 alone, and they are almost all referring to economics, not water pumps.

In fact, arguably “priming the pump” is now a “dead metaphor,” or a metaphor in which the original evocative meaning is largely lost. Not many people have a home water pump they need to prime anymore, after all. Other dead metaphors include “champing at the bit” (technically a reference to obstreperous horses) or “selling like hot cakes” (an early term for pancakes, which were in high demand in the 19th century).

Does Trump really think that he invented it?

A more generous reading of the interview with The Economist suggests that perhaps he didn’t literally mean that he came up with the term on his own; he seemed to know that it was a phrase that the editors might have already heard. Still, this fits with a pattern in which the president seems to learn of widely known, widely discussed concepts and view them as novel and revelatory.

For example, he seemed surprised when the Chinese president explained why his country couldn’t simply coerce North Korea into more agreeable behavior, and he has expressed wonderment that health care policy is complicated.

Is now a really good time to be priming the pump?

In Keynesian economic theory, the strategy makes the most sense when there are underutilized economic resources to be tapped, such as during a recession or depression. While the United States economy probably isn’t yet at full capacity, with the unemployment rate at 4.4 percent it does seem to be closing in on full employment. Factories are running closer to full speed, among other evidence that the economy is hardly depressed.

Perhaps workers who have left the labor force could be coaxed back in with faster economic growth, or the right mix of tax and regulatory policies could unleash higher productivity growth. But those are more esoteric arguments than the standard “prime the pump” concept.

To extend the metaphor, it’s hard to prime a pump when the water is already flowing just fine.

Are there any other concepts from Keynesian economics the president might wish to learn about?

There is one that might hold special interest for him. As Zach Carter of The Huffington Post noted in a tweet, one of the most famous and influential pieces of analysis Keynes offered was a metaphor for how financial markets work.

The stock market, Keynes argued, was much like a hypothetical beauty contest in which readers of a newspaper had not simply to vote for whom they found most beautiful, but to predict whom others would find most beautiful. This in turn would create perverse feedback loops that might lead to winners who aren’t actually the most beautiful.

For a former owner of the Miss Universe pageant, this would seem to be a financial idea that would be easy to remember — or maybe to invent all over again.