Kim Davis and the law: Q&A in clerk standoff

A. She is an elected official and can only be removed from office for impeachment.

How would she be impeached?

The Kentucky House of Representatives would have to charge her with an impeachable offense and the Senate would then try her.

The Kentucky Equality Federation, a gay rights group, has called for Gov. Steve Beshear to call a special session of the General Assembly to pursue impeachment. But Beshear, citing costs, has already declined to convene a special session to consider emergency legislation that would accommodate Davis and other clerks by having state government issue marriage licenses. Also, Bluegrass Polls show most Kentucky voters oppose gay marriage and support accommodating Davis.

“The legislature has placed the authority to issue marriage licenses squarely on county clerks by statute, and I have no legal authority to relieve her of her statutory duty by executive order or to remove her from office,” Beshear said in a statement Tuesday.

Can Davis be charged with a crime?

After being denied a license four times, a gay couple has asked the Rowan County attorney to charge her with official misconduct, a misdemeanor punishable by up to a year in jail. But citing a conflict of interest — he is defending the county in suits naming Davis — he referred the request to the attorney general’s office, which is deciding whether to appoint a special prosecutor.

The two gay and straight couples who sued Davis have asked U.S. District Judge David Bunning to find her in contempt of court. A hearing is set for 11 a.m. Thursday in Ashland.

What punishment could she get for that?

Bunning could jail or fine her, but the plaintiffs are seeking only monetary penalties, apparently to avoid engendering sympathy for her in jail. Bunning could order her to pay the fines out of her own pocket, rather than with taxpaper money.

Does Davis have any options left?

She can still pursue her appeal in the 6th Circuit Court of Appeals, but her bids to delay compliance ran out on Monday night when the Supreme Court denied her a stay.

Could local officials try to remove her?

Kentucky law allows a commonwealth’s attorney to indict county judges-executives, justices of the peace, sheriffs, coroners, surveyors, jailers, county attorneys and constables for malfeasance in office or willful neglect in the discharge of official duties, for which they can be fined up to $1,000 and removed from office upon conviction. But for some reason lost to history, the statute doesn’t include county clerks.

What are Davis’ grounds for refusing to comply with court orders?

She says that to issue a marriage license to same-sex couples, on which her name would be signed, conflicts with God’s definition of marriage and would violate her conscience. She says her religious liberty should be protected under the Kentucky and U.S. Constitutions and the Kentucky Religious Freedom Act.

KENTUCKY — The Supreme Court on Monday night, August 31st denied an emergency application from a Kentucky clerk who has been refusing to issue marriage licenses because of her religious objections to same-sex marriage.

The clerk, Kim Davis, sought to put a lower court ruling on hold pending appeal, and in a one-page order the Supreme Court refused.

The order marks the first time the issue of same-sex marriage has come back to the justices since they issued an opinion last June clearing the way for same-sex couples to marry nationwide.

Davis, of the Rowan County Clerk’s office, has refused to issue any marriage licenses since the decision — Obergefell v. Hodges — came down. She is an Apostolic Christian who says that she has a sincere religious objection to same-sex marriage. Other clerks in the state have expressed concern, but Davis is the only one turning away eligible couples.

In Court papers, lawyers for Davis said that her “conscience forbids her from approving a (same-sex marriage) license — because the prescribed form mandates that she authorize the proposed union and issue a license bearing her own name and imprimatur.”

“In her belief,” the lawyers wrote, “(same-sex marriage) is not, in fact, marriage.”

They said issuing a same-sex license would amount to a “searing act of validation” that would “forever echo in her conscience.” 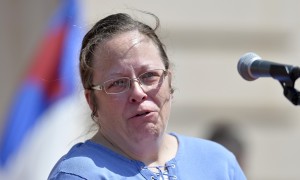