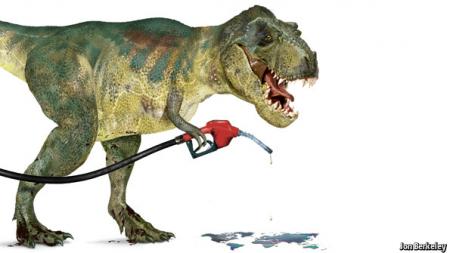 THE dawn of the oil age was fairly recent. Although the stuff was used to waterproof boats in the Middle East 6,000 years ago, extracting it in earnest began only in 1859 after an oil strike in Pennsylvania. The first barrels of crude fetched $18 (around $450 at today’s prices). It was used to make kerosene, the main fuel for artificial lighting after overfishing led to a shortage of whale blubber. Other liquids produced in the refining process, too unstable or smoky for lamplight, were burned or dumped. But the unwanted petrol and diesel did not go to waste for long, thanks to the development of the internal-combustion engine a few years later.

Since then demand for oil has, with a couple of blips in the 1970s and 1980s, risen steadily alongside ever-increasing travel by car, plane and ship. Three-fifths of it ends up in fuel tanks. With billions of Chinese and Indians growing richer and itching to get behind the wheel of a car, the big oil companies, the International Energy Agency (IEA) and America’s Energy Information Administration all predict that demand will keep on rising. One of the oil giants, Britain’s BP, reckons it will grow from 89m b/d now to 104m b/d by 2030.

Scraping the barrel
We believe that they are wrong, and that oil is close to a peak. This is not the “peak oil” widely discussed several years ago, when several theorists, who have since gone strangely quiet, reckoned that supply would flatten and then fall. We believe that demand, not supply, could decline. In the rich world oil demand has already peaked: it has fallen since 2005. Even allowing for all those new drivers in Beijing and Delhi, two revolutions in technology will dampen the world’s thirst for the black stuff.

The first revolution was led by a Texan who has just died (see article). George Mitchell championed “fracking” as a way to release huge supplies of “unconventional” gas from shale beds. This, along with vast new discoveries of conventional gas, has recently helped increase the world’s reserves from 50 to 200 years. In America, where thanks to Mr Mitchell shale gas already billows from the ground, liquefied or compressed gas is finding its way into the tanks of lorries, buses and local-delivery vehicles. Gas could also replace oil in ships, power stations, petrochemical plants and domestic and industrial heating systems, and thus displace a few million barrels of oil a day by 2020.

The other great change is in automotive technology. Rapid advances in engine and vehicle design also threaten oil’s dominance. Foremost is the efficiency of the internal-combustion engine itself. Petrol and diesel engines are becoming ever more frugal. The materials used to make cars are getting lighter and stronger. The growing popularity of electric and hybrid cars, as well as vehicles powered by natural gas or hydrogen fuel cells, will also have an effect on demand for oil. Analysts at Citi, a bank, calculate that if the fuel-efficiency of cars and trucks improves by an average of 2.5% a year it will be enough to constrain oil demand; they predict that a peak of less than 92m b/d will come in the next few years. Ricardo, a big automotive engineer, has come to a similar conclusion.

Not surprisingly, the oil “supermajors” and the IEA disagree. They point out that most of the emerging world has a long way to go before it owns as many cars, or drives as many miles per head, as America.

But it would be foolish to extrapolate from the rich world’s past to booming Asia’s future. The sort of environmental policies that are reducing the thirst for fuel in Europe and America by imposing ever-tougher fuel-efficiency standards on vehicles are also being adopted in the emerging economies. China recently introduced its own set of fuel-economy measures. If, as a result of its determination to reduce its dependence on imported oil, the regime imposes policies designed to “leapfrog” the country’s transport system to hybrids, oil demand will come under even more pressure.

A fit of peak
A couple of countervailing factors could kick in to increase consumption. First, the Saudis, who control 11% of output and have the most spare capacity, may decide to push out more, lowering prices and thus increasing demand. Then again, they might cut production to try to raise prices, thereby lowering demand further. Second, if declining demand pushes down the oil price, drivers may turn back to gas-guzzling cars, as they did when oil was cheap in the 1990s. But tightening emissions standards should make that harder in future.

If the demand for oil merely stabilises, it will have important consequences. The environment should fare a little better. Gas vehicles emit less carbon dioxide than equivalent petrol-powered ones.

The corporate pecking order will change, too. Currently, Exxon Mobil vies with Apple as the world’s biggest listed company. Yet Exxon and the other oil supermajors are more vulnerable than they look (see article). Bernstein, a research firm, reckons that new barrels of oil from the Arctic or other technologically (or politically) demanding environments now cost $100 to extract. Big Oil can still have a decent future as Big Gas, but that will not prove as profitable.

The biggest impact of declining demand could be geopolitical. Oil underpins Vladimir Putin’s kleptocracy. The Kremlin will find it more difficult to impose its will on the country if its main source of patronage is diminished. The Saudi princes have relied on a high oil price to balance their budgets while paying for lavish social programmes to placate the restless young generation that has taken to the streets elsewhere. Their huge financial reserves can plug the gap for a while; but if the oil flows into the kingdom’s coffers less readily, buying off the opposition will be harder and the chances of upheaval greater. And if America is heading towards shale-powered energy self-sufficiency, it is unlikely to be as indulgent in future towards the Arab allies it propped up in the past. In its rise, oil has fuelled many conflicts. It may continue to do so as it falls. For all that, most people will welcome the change.