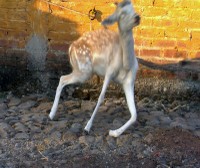 Walk into the Walter and McBean Galleries in San Francisco’s posh Russian Hill neighborhood, and you may be shocked to see what passes for contemporary “art” these days. Six televisions display video images of six different animals — a doe, a goat, a horse, an ox, a pig, and a sheep — being bludgeoned to death with a large sledgehammer by “artist” Adel Abdessemed of Paris. Entitled “Don’t Trust Me,” this sick exhibit is Abdessemed’s and the Institute’s self-serving attempt to pass off the brutal abuse and killing of animals as legitimate artistic creation.

What such “artists” and their patrons overlook is that animals are living beings who feel and suffer just like we humans — and we are no more justified in taking their lives at will than we have the right to kill another person. Such abuse of animals may elicit horror and disgust in viewers, but that does not qualify it as art. Far from it — in fact, “Don’t Trust Me” represents the very worst impulses of the human imagination.
It takes no artistic talent or ability to kill animals, and Abdessemed should have never been given a venue for his sickening “work” in the first place. To their great discredit, the San Francisco Art Institute agreed to sponsor this exhibit, lending it an air of credibility, but what makes matters worse are the obscene rationalizations this venerable institution of learning and culture offers in defense of the sleazy snuff films. These include pedantic claims that such killings “regularly take place…in the real world, on a regular basis,” and that the installation “(makes) typical moral and cultural constraints seem beside the point.”

Such statements betray not only a lack of compassion and basic human decency, but also a fundamental confusion of true artistic creation with the destruction of life. Abdessemed’s work is of no artistic value, and rather than raise people’s consciousness about the cruelties committed against animals every day, it will encourage them to accept animal abuse as a way of gaining attention and notoriety.

To call someone who murders animals an “artist” is an insult to every real artist who refuses to rely on violence and shallow, sensationalistic gimmicks to express his or her vision. While the work of such murderers will surely not endure, their antics may encourage and incite others to torture and kill animals, so it is crucial that people of conscience voice our outrage over this monstrous display of cruelty.

Please Take Action to urge the San Francisco Art Institute to remove Abdessemed’s disgusting exhibit immediately, and implement a policy explicitly prohibiting exhibits for which animals were exploited or killed.