More than 20 tech luminaries, including Vint Cerf, Tim Berners-Lee and Steve Wozniak, have urged the FCC to stop its plan to repeal net neutrality. 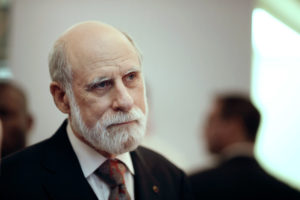 Vint Cerf, Google’s vice president and “father of the internet,” was one of more than 20 tech luminaries who wrote a letter to lawmakers this week urging them to push the FCC to cancel its vote on net neutrality. KENZO TRIBOUILLARD VIA GETTY IMAGES. Image: https://img.huffingtonpost.com/asset/5a2f50a01600004700c4f5f4.jpeg?cache=2fn5uutnzr&ops=scalefit_720_noupscale

Internet luminaries, including “father of the internet” Vint Cerf and Tim Berners-Lee, inventor of the World Wide Web, have a blistering message for the Federal Communications Commission as its vote on net neutrality looms: “You don’t understand how the internet works.”

In an open letter published Monday, more than 20 industry leaders and pioneers skewered the FCC over its plan to repeal net neutrality rules, which require internet service providers (ISPs) to treat all content equally.

“It is important to understand that the FCC’s proposed Order is based on a flawed and factually inaccurate understanding of Internet technology,” the letter, addressed to lawmakers with oversight of the FCC, reads. “These flaws and inaccuracies were documented in detail in a 43-page-long joint comment signed by over 200 of the most prominent Internet pioneers and engineers and submitted to the FCC on July 17, 2017. Despite this comment, the FCC did not correct its misunderstandings.”

The comment referred to in the letter detailed numerous technical mistakes in the FCC’s proposed order, including a flawed understanding of the differences between ISPs and edge providers (content companies like Netflix), and how firewalls function (described in the document as “a stunning lack of technical knowledge”).

The engineers and experts who wrote the comment warned that repealing net neutrality could have “dangerous consequences, including stifling future innovation and depressing future investment in the wealth of Internet services that drive such a large part of the U.S. economy.”

The letter detailed how the FCC has not just ignored experts’ warnings but also the millions of public comments that have been submitted on the issue. The FCC, the letter noted, has also not “held a single open public meeting to hear from citizens and experts about the proposed Order” ― a break from “established practice.”

Should the vote go as expected, companies like AT&T, Comcast and Verizon (which owns Oath, HuffPost’s parent company) would be able to do things like block “content, websites and applications, slowing or speeding up services or classes of service, and charging online services for access or fast lanes to Internet access providers’ customers.”

Protests against the vote have cropped up around the country, and celebrities have also been speaking out in an effort to delay the vote or prevent it entirely.

“The FCC’s rushed and technically incorrect proposed Order to abolish net neutrality protections without any replacement is an imminent threat to the Internet we worked so hard to create. It should be stopped,” the letter concluded.