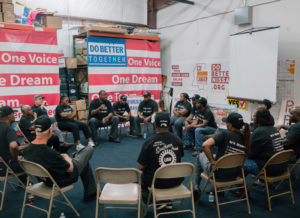 Campaigning in a union election at a Nissan plant in Canton, Miss., where a large majority of workers are African-American, took on racial overtones. Credit Bryan Schutmaat for The New York Times

In a test of labor’s ability to expand its reach in the South, workers at a Nissan plant in Mississippi have overwhelmingly rejected a bid to unionize.

Out of roughly 3,500 employees at the Canton-based plant who voted Thursday and Friday, more than 60 percent opposed the union. It was an emphatic coda to a yearslong organizing effort underwritten by the United Automobile Workers, which has been repeatedly frustrated in its efforts to organize major auto plants in the region.

The election campaign at the plant, where a large majority of workers are African-American, frequently took on racial overtones. Some employees alleged that white supervisors dispensed special treatment to white subordinates, a charge the company emphatically denied.

For their part, anti-union workers highlighted the U.A.W.’s contributions to local civil rights and religious groups, accusing the union of seeking to buy support in the African-American community.

In the end, though, basic economics combined with a fear of change may have carried the day. Veteran workers at the plant make about $26 per hour, typically only a few dollars less than veteran workers represented by the union at the major American automakers, and well above the median wage in Mississippi.

Nissan also pays a roughly similar percentage of employees’ incomes into their retirement accounts as do the Michigan automakers.

Before coming to Nissan more than 14 years ago, “I didn’t have a 401(k), I had one week of vacation,” said Marvin Cooke, a Nissan paint technician who was previously an assistant manager at a Shoney’s restaurant. “Now, I have four weeks’ vacation. I’m off on every holiday. Nissan has provided a great living for me.”

Mr. Cooke voted against the union.

While a significant number of workers at the plant, which has a total work force of nearly 6,500, are contract workers who earn lower wages than employees, they were not eligible to vote in the union election.

Publicly, Nissan emphasized how the plant was an economic lifeline for workers in the area, including one commercial in which a Mississippi pastor described how people were “fluctuating back and forth looking for jobs” before the plant arrived, but could now “come through the door knowing the lights are on, the water is running.”

The message resonated with many workers, although some found it condescending. “They were telling African-Americans look what they provided for us, but I had a job before I came to Nissan,” said David Brown, who was undecided the week before the vote but ended up supporting the union. “I had a house already, had cars already. Nissan didn’t provide me with it.”

In meetings between management and workers, and in a video featuring the plant’s top official, Nissan was more menacing, suggesting that a union would put workers’ jobs at risk.

“They’ve come out with some of the nastiest, most unprecedented attacks I’ve seen in the 20 years I’ve been doing this,” said Gary Casteel, the second-ranking official at the U.A.W. “This issue of threatening to close a facility is the worst threat you can put toward an employee.”

At one point leading up to the vote, managers delivered a slide presentation warning that in the event of a strike, most employees who walked out would not be guaranteed jobs afterward. Many workers appeared to find the presentation alarming, even though strikes are rare in the industry and replacing production workers could be difficult.

Another manager emphasized in a meeting that Nissan could decide not to automatically deduct workers’ union dues, in which case the union would end up sending workers a regular “bill.”

“It was just to deter people from joining, was what I’m getting out of it,” said Earnestine Mayes, a union supporter. “No one wants to sit there and pay that bill every week.” 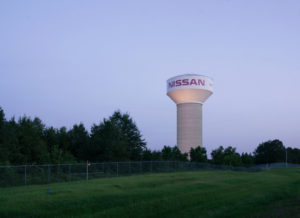 Veteran workers at the plant make about $26 per hour, well above the median wage in Mississippi. Credit Bryan Schutmaat for The New York Times

The company said its communications with workers were an attempt to provide information and clear up misimpressions, and that dues were not a focal point.

A regional director of the National Labor Relations Board, prompted by a series of charges filed by the U.A.W., issued a complaint last week accusing Nissan of illegally threatening to close the plant if workers chose to unionize, and threatening to fire workers involved in the organizing effort.

But over all, the union was hobbled in its ability to push back against the company’s message to workers. Beyond the question of its contributions to local groups, which the union said were similar to contributions it has made to civil rights and religious groups for decades, anti-union workers dwelled on the indictment last week of a former Fiat Chrysler labor relations official accused of skimming millions of dollars from a training facility to benefit himself and a former U.A.W. counterpart.

The defeat raises further questions about organized labor’s potential for inroads in the sparsely unionized South, which many union leaders see as the key to improving wages and labor standards across the country.

This year, workers rejected a union by a nearly 3-to-1 margin at a Boeing plant in South Carolina after a long organizing effort by the International Association of Machinists and Aerospace Workers.

In 2014, the U.A.W. narrowly lost a hotly contested organizing campaign at a Volkswagen facility in Tennessee, although a small group of the plant’s skilled-trades workers later voted to unionize, and the union has notched some victories at Southern auto parts-suppliers in recent years.

“If you’re in an area where there are unions, people have friends, neighbors and relatives that might be in a union, and it’s very clear that people in unions like them,” said Hoyt N. Wheeler, a retired business professor who taught labor relations at the University of South Carolina.

But in a region like the South, few workers can speak from personal experience on the union’s behalf when the company or local politicians attack. “It makes it tough; you don’t have contrary voices,” Mr. Wheeler said.

Whatever its advantages, Nissan took no chances, pressing its case through the final days. This week, it set up a huge tent outside the facility and invited every worker on each shift, even those ineligible to vote, for meetings in which senior plant officials made their closing pitch.

For Mr. Brown, the previously undecided worker, the meeting proved to be the final shove in the direction of the union.

“Management comes down talking about how good we’ve got it,” Mr. Brown said. “But we’re not going to answer any questions, any concerns you have.”

A Nissan spokeswoman, Parul Bajaj, said that “employees were reminded of the significance of the election and encouraged to exercise their right to vote,” and that human resources officials were available in the back of the room to take questions.

By contrast, Kinoy Brown, a 14-year veteran who works on engines, saw the meeting as an earnest attempt to unify the plant after a bruising campaign.

“This U.A.W. mess has divided the plant,” said Mr. Brown, who voted against the union. “A lot of speeches there were about unity, about remembering the goal.”

He added: “They were telling us: ‘Hey, let’s get this behind us. Let’s go build some cars and trucks. Let’s build people’s dreams.’”