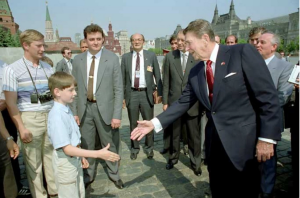 President Obama has been taking heat from Republicans for not being more confrontational with Russian President Vladimir Putin over the invasion of Crimea. (Like we were in the previous decades when the commies invaded Hungary during Eisenhower and Czechoslovakia during Johnson and Georgia during Bush 2?)

Inevitably, a photo of President Ronald Reagan touring  Red Square with former Russian leader Mikhail Gorbachev in 1988  has resurfaced, showing Reagan greeting a Russian kid and with someone looking a lot like Vlad himself standing nearby.

Reagan (and now Obama) White House photographer Pete Souza, who took the photo, recalled in a  2012 interview on NPR  that “there were these differrent groups of quote- unquote tourists”  in Red Square who kept asking Reagan about “human rights in the United States.”

Souza said he asked a Secret Service agent how “how these tourists in the Soviet Union are asking these pointed questions.” The agent answered: ” Oh, these are all KGB families.”

Souza said he was told the “tourist”  with the camera was Putin, ” and it certainly does look like him.”

What do you think?