China’s top newspaper on Tuesday accused both the United States and Russia of replaying their Cold War rivalry by engaging in military action in Syria, saying they needed to realize that era is over and should instead push for peace talks. 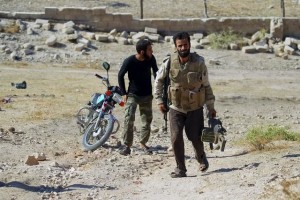 Rebel fighters carry their weapons as they head toward their positions in the town of Kafr Nabudah, in Hama province, Syria, on which forces loyal to Syria’s President Bashar al-Assad are carrying out offensives to take control of the town, October 11, 2015. REUTERS/AMMAR ABDULLAH 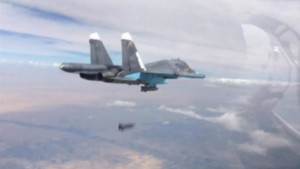 A frame grab taken from footage released by Russia’s Defence Ministry October 9, 2015, shows a Russian Su-34 fighter-bomber dropping a bomb in the air over Syria. REUTERS/MINISTRY OF DEFENCE OF THE RUSSIAN FEDERATION/HANDOUT VIA REUTERS

The People’s Daily, the official paper of China’s ruling Communist Party, said in a commentary that the United States and Russia seemed to be using Syria as a proxy for diplomatic and military competition, as during the Cold War.

“The United States and the Soviet Union used all sorts of diplomatic, economic and military actions on the soil of third countries, playing tit-for-tat games to increase their influence – it’s an old scene from the Cold War,” the newspaper wrote in a commentary.

“But we’re in the 21st century now, and people need to get their heads around this!,” it added.

While China generally votes with fellow permanent United Nations Security Council member Russia on the Syria issue, it has expressed concern about interference in Syria’s internal affairs and repeatedly called for a political solution.

Russia last month began striking targets in Syria in a dramatic escalation of foreign involvement in the civil war. This has been criticized by the West as an attempt to prop up Syrian President Bashar al-Assad, rather than its purported aim of attacking Islamic State.

The United States and its allies have also been carrying out air strikes in Syria against Islamic State, and have supported opposition groups fighting Assad.

The People’s Daily said nobody should stand by while Syria becomes a proxy war, and efforts to reach a peaceful settlement to the crisis should not slacken.

“The international community, especially large countries with much influence, must fully recognize the critical, urgent necessity to reach a political solution to the Syria issue,” it said.

The commentary was published under the pen name “Zhong Sheng”, meaning “Voice of China”, often used to give views on foreign policy.

China, a low-key diplomatic player in the Middle East despite its dependence on the region for its oil, has repeatedly warned that military action cannot end the crisis.