A college librarian in Kentucky has found the 19th-century manuscript of a musical number that gave rise to one of the most widely performed songs in the world, “Happy Birthday to You,” University of Louisville officials said on Monday. 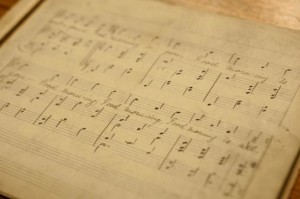 Sheet music for the song Good Morning To All is seen in an undated photo provided by the University of Louisville, Kentucky.
REUTERS/UNIVERSITY OF LOUISVILLE/HANDOUT VIA REUTERS

The discovery will likely intensify interest in a high-profile U.S. court case over whether Warner Music Group has a valid copyright to the “Happy Birthday” song and can continue to reap from it an estimated $2 million in royalties every year.

The university said its library director, James Procell, recently found the only known manuscript of “Good Morning to All,” a melody that the public eventually began to sing with the familiar tribute, “Happy Birthday to You.”

The document was found in a sketch book belonging to Louisville native Mildred Hill, who wrote the “Good Morning” song along with her sister Patty, a kindergarten teacher, and published it in a children’s song book in 1893.

The manuscript and other papers were donated to the library in the 1950s by a friend of the Hill sisters, but were not cataloged. They remained hidden in its archives for decades. 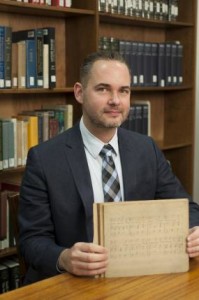 Library director James Procell poses with sheet music for the song Good Morning To All in an undated photo provided by the University of Louisville, Kentucky.
REUTERS/UNIVERSITY OF LOUISVILLE/HANDOUT VIA REUTERS

The university made no mention of a copyright notice on the manuscript, and its first page is missing. It is unlikely to have a direct impact on the federal lawsuit, filed by a group of artists who argue the song has been copyright-free for decades, said their lawyer, Mark Rifkin.

The artists, a musician and three filmmakers, filed their putative class action against Warner in 2013 seeking a return of the fees Warner has collected over the years for use of the song, mostly in TV and film.

Warner’s copyright in the song originates with the Clayton F. Summy Co, later known as Birch Tree and acquired by Warner. Summy had obtained registrations to “Happy Birthday” in 1935, according to court papers.

U.S. District Judge George King in Los Angeles is mulling over the arguments made by both sides. The artists recently told him they found a “smoking gun” in the form of an old songbook that they say legally proves the copyright is no longer valid. Warner disputes that claim.

A spokesman for Warner could not immediately be reached for comment.

Procell plans to digitize and catalog Mildred Hill’s papers and a concert of her music is planned for 2016, a century after her death, the university said.